A&K’s operations manager in Jordan, Salam Shaqdeeh shares her insider knowledge on what to do when you’ve got two days to get to know the kingdom’s capital

Amman is a delightful mix of history and modern manners. Cool cafés and shops complement the city’s ancient allure, sitting alongside exotic souks, medieval mosques and Roman ruins. No mere gateway to Petra, this unique Middle Eastern city is ready to surprise you.

Known as Philadelphia to the Romans, it languished until it became Jordan's capital as recently as 1921. Originally built on seven hills, the metropolis sprawled in the 1920s and a tale of two cities began. The east is traditional and centred on Downtown while the west is more modern, complete with glass and steel buildings. 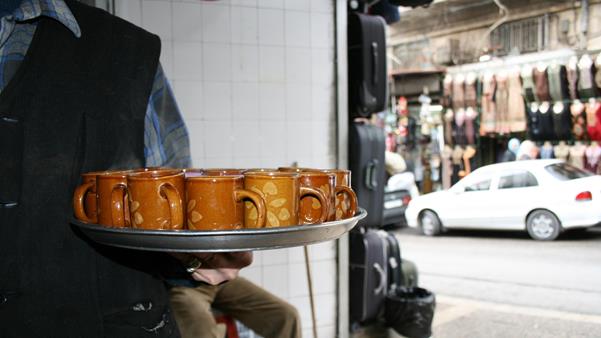 Start your day in Amman’s Downtown at Jafra’s restaurant. Enjoy a cup of coffee or tea with a slice of freshly cooked manakeesh (a flatbread topped with herbs and cheese or meat) at this cosy café. Located in the jumble of buzzing backstreets, this little gem is very popular with locals. 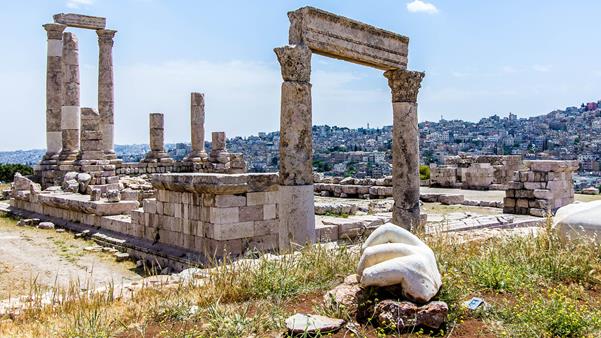 The ruins of the Temple of Hercules on the Citadel

After breakfast, wander around the Citadel. This ancient complex is comprised of ruins from the Roman, Byzantine and Umayyad (661-750AD) periods. The columns of what was once the Temple of Hercules make a great spot for a keepsake photo. Located on one of Amman’s seven original hilltops, the 360-degree views stretching all the way to the desert, alone, are worth the climb. Don’t miss the small but perfectly formed Archaeological Museum. Its display includes pottery and statues that date back to the Palaeolithic period. The archaeological site also overlooks the Roman Theatre, which dominates the heart of Downtown. 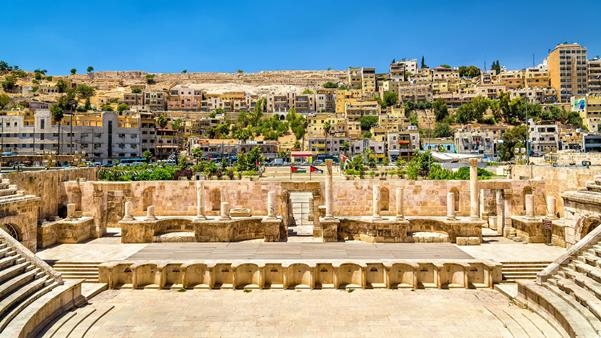 From the Citadel, head downhill to the Roman Theatre. Built between 169 and 177AD, during the reign of Marcus Aurelius, this theatre held around 6,000 of Philadelphia’s residents. The scaenae frons (stage front) is relatively well preserved with two freestanding Corinthian columns from base to capital remaining in situ. The theatre is still in use as a cultural venue – the Amman International Book Fair is held here.

For a classic Levantine lunch, it’s off to Kan Zaman restaurant. It’s out of the way, on the outskirts of Amman on the route to the airport, but it’s a firm favourite with locals and tourists alike. With excellent food and above-par service, you’ll quickly realise why. Try the kanafeh, a cheese-based pudding covered in sweet syrup, and a pale ale from a Jordanian craft brewery.

A cave may be an unusual place to house a museum, but this afternoon visit the Asi Cave. At 2,000 square metres, the underground vault contains a fascinating collection of antiquities with pottery jars dating from the Bronze Age to the Byzantine era. There are many other curios on display to marvel at – everything from wine presses and statues to column fragments.

Rainbow Street is a cobbled road lined with modish shops and cool cafés. This thoroughfare is the city’s most vibrant and is where Amman’s residents hang out after a busy day. Grab a falafel sandwich from renowned Al-Quds restaurant before heading to Cantaloupe Gastro Pub for a drink on the bar’s rooftop, while admiring views of the Citadel.

Animal lovers and racing fanatics will appreciate a trip to Jordan’s Royal Stables. Arabian horses can be distinguished from other breeds by their proud necks, arched tails, pricked ears and large oval nostrils. The stable houses 250-plus horses. Considered national treasures, most of the occupants descend from seven mares owned by King Abdullah I. Tour the facility with the stables manager and visit the museum, then indulge with a special Champagne breakfast in the gardens of the Royal Stables, while watching a display performed by the occupants.

The Jordan Museum in Ras al-Ayn opened in 2014 and houses the country’s most important archaeaological finds – Jordan’s share of the Dead Sea Scrolls and the lime plaster and reed Ain Ghazal statues, which date to 7,200-6,500BC, making them some of the earliest ever found. Afterwards head to Downtown’s souks – packed with bargain-hunters searching the artisan and merchant stalls.

Fakhr El Din restaurant is a classy lunch choice. Set in the impressive ex-residence of a former prime minister, this Lebanese eatery is one of the best in Amman. Recommended dishes include the galayet bandora (a sautéed onion stew), kibbeh neyyeh (minced raw meat), and mutabal (a roasted aubergine dip). 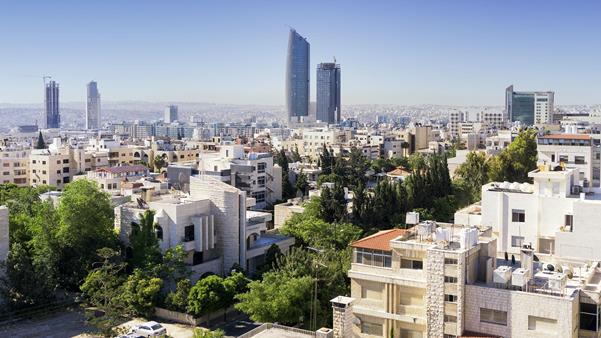 Located in King Hussein Park, the Royal Automobile Museum is a must for petrolheads. The display of over 70 classic cars and motorbikes tells the tale of Jordan in modern times. All exhibits are from the personal collection of car-loving King Hussein, who ruled from 1956 to 1999. With any time left over, tour the west of the city – the distinctly modern side of Amman.

Jabal al-Weibdeh may be one of the oldest neighbourhoods in Amman, but it’s also one of the trendiest. Its labyrinthine streets are where the city’s foodies go. Have a Jordanian beer at never-empty Café de Paris and then head to Rakwet Arab café for a bite.