January 13, in Our Travels

As Egypt makes its comeback, Sue Bryant discovers the Pharaonic wonders and cruising delights of this fascinating country

The Nile is infused with a soft, golden glow at sunset, the sounds and smells of Egypt hanging in the air: wood smoke, roosters crowing, donkeys braying, the call to prayer echoing out from a minaret in a distant village. I’m on the deck of Sanctuary Sun Boat IV, enjoying the warm breeze and the gentle clink of ice in my gin and tonic.

I’m here to explore Upper Egypt for a few days and I’m curious about what might await me. Ten years have passed since my previous visit. Tourism was at its peak then, with more than 14 million visitors swarming over the ancient temples, and riverboats steaming up and down the Nile. But that was before the Arab Spring. By 2016, arrivals had dropped to just 5.4 million.

Now, there’s a new sense of optimism in the air as visitors are coming back. Hotels, riverboats, and temples are being spruced up and, once again, the banks of the Nile at Luxor and Aswan are busy with cruise vessels.

My journey starts in the south of the country, in Aswan. The Nile is especially pretty here, threaded with smooth granite islands and grassy sandbanks, feluccas zipping back and forth, river breezes filling their sails. Ibis perch like statues on the rocks against a backdrop of undulating, golden sand dunes.

The sun is intense, though, so I take refuge in the Sofitel Legend Old Cataract Hotel. It was in this opulent, chandeliered palace, all Moorish arches and gently whirring ceiling fans, that Agatha Christie wrote Death on the Nile. The novelist travelled all over the Middle East with her second husband, archaeologist Max Mallowan, and Egypt was her romantic muse. I can just imagine her, installed on one of the shaded terraces overlooking the Nile, cooking up the twisting thriller of love, jealousy, and revenge. A small shrine to Christie sits in the lobby, her chair, desk, and portrait cordoned off by a red velvet rope. I sit on the terrace, gazing at the river as the sun sets behind Elephantine Island, throwing tall date palms into silhouette. 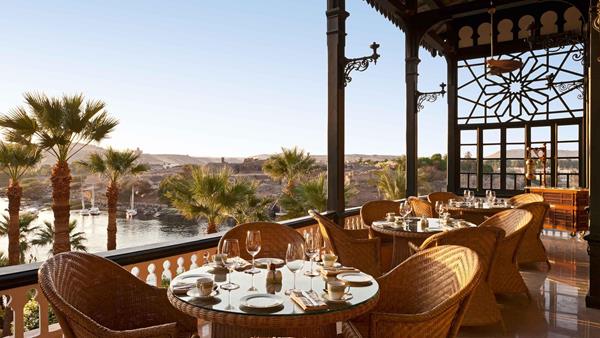 Back in 1977, this vista would have been much the same, but tourism in Egypt was a different picture then; there were only two river cruisers operating on the Nile, for a start. A&K’s founder, Geoffrey Kent, was in Egypt with a view to setting up his own river cruise operation. In Aswan, he encountered a film crew, who were staying at the Old Cataract Hotel, as it was called then. Agatha Christie’s Death on the Nile was being shot with an all-star cast: Peter Ustinov as Poirot, supported by Bette Davis, Maggie Smith, Angela Lansbury, and David Niven.

Geoffrey knew David Niven; the actor’s son had taken an early A&K trip in east Africa and had introduced the two men. Over dinner on one of the Nile cruisers, the actor pointed out an old steamship, the SS Memnon, glowing in the sunset; it played a starring role in the film, as the Karnak. The seed of a brilliant idea was planted.

After a brief visit to the charming old paddle wheeler, an excited Kent decided to lease the Memnon and offer cruises on her to coincide with the opening of the film. The owner agreed and A&K’s own Egyptian river cruise operation was born. A prominent Egyptologist, Anthony Hutt, was hired to lead the first trip, for a private charter by a wealthy American investment banker.

Disaster struck the minute Memnon’s engines were started; a panicked call from Tony Hutt revealed that a hefty puff of black smoke had shot out of the funnel, depositing oily soot on all the passengers. Worse still, the plumbing didn’t work. Visiting the ship had been one thing. Sailing on it was another entirely. The charter had to be cancelled. Geoffrey Kent promised the Americans that they would be the first on board once the company had built its own ship – which he vowed to do. “We’d sold out the Memnon cruise in one go,” he remembers. “I’d hit on an idea people wanted and I had to improve on my original plan before our competitors did.” The Sun Boat was to be the most luxurious vessel on the Nile, with panoramic windows, lavish marble detailing, and a swimming pool. Such was the demand for this level of luxury that Sun Boat II, III and IV followed. 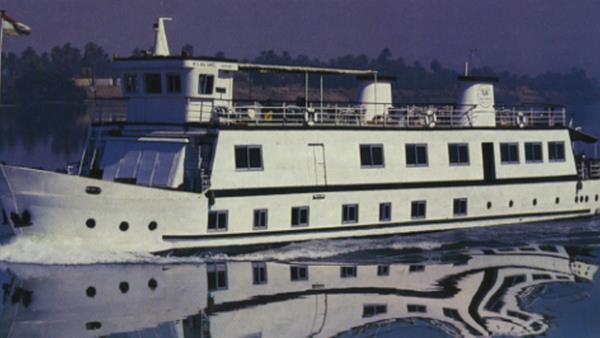 A new version of Death on the Nile is on the horizon, too, which will no doubt boost interest in Egypt. Kenneth Branagh will direct, in a follow up to his opulent 2017 production of Murder on the Orient Express, reviving his own turn as Poirot. The film is due for release in autumn 2020, with Wonder Woman star Gal Gadot as Linnet Ridgeway Doyle, the murdered heiress, and Armie Hammer as Simon Doyle.

My own Egyptian odyssey is thankfully less dramatic than that of the hapless Linnet. Sanctuary Sun Boat IV exudes taste and style, refitted last year in shades of cream, stone, and silvery grey, lifted by splashes of rich blue and burnt orange, exquisite Egyptian lanterns throwing soft shadows in geometric forms. Days on board follow a blissful pattern: an early start, to visit ancient temples before the heat intensifies. Delicious lunches: fresh salads scattered with pomegranate seeds, dips of aubergine, lentils and chickpeas, warm pita, and savoury pastries. Afternoons spent either sailing or visiting more temples as the light softens. Magic hour and sundowners on deck, followed by gourmet dinners.

We wake to fresh, cool air on our first morning in Aswan; perfect for exploring Philae Temple, dedicated to the goddess Isis and perched prettily on an island in the Nile. It’s here that the ancient Egyptians are believed to have written their last hieroglyphs, in the fourth century AD, and you can see early Coptic graffiti on the walls, as well as the much later carvings of Victorian adventurers. There’s nobody around, although a few tour groups drift in as we leave.

We sail for Edfu, a blissfully relaxing afternoon on deck, lazing in the shade of oversized sun umbrellas and rattan cocoon chairs, dipping occasionally into the shimmering blue pool. On the banks,

a constantly shifting scene unfurls as we head north: children running along the beaches, waving; water buffalo standing like statues in the shallows; and farmers toiling in emerald-green fields. Shifting dunes encroach constantly on the fertile strip that lines the Nile, changing colour as the sun crosses the sky.

At Edfu, we are driven in convoy through the bustling town to the immense Temple of Horus, brooding in the darkness. But the ancient façades and pillars come to life in the blackness as coloured spotlights of a sound and light show pick out ancient columns, images of the falcon-headed god projected onto the massive, 36-metre-tall façade. It’s eerily magical. 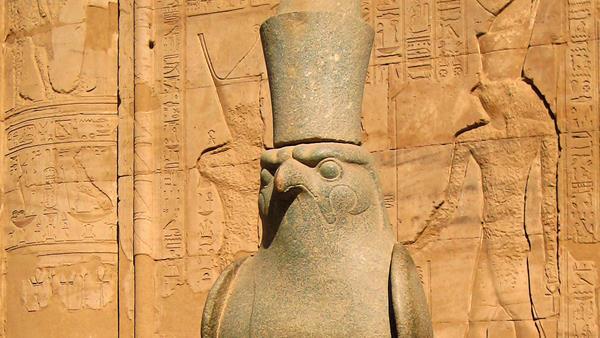 Aswan is really just a prelude to the astonishing treasures of Luxor: ancient Thebes, necropolis of ancient Egypt’s greatest kings and queens. I’ve always loved visiting the tombs concealed under the barren rocks of the Valley of the Kings. Although their treasures are long since plundered, the preservation of the colour and detail on the walls is astonishing, both in its intricacy and its intensity. And while the tourists are certainly back, there are no queues to get in. I pay a token extra fee to visit the tomb of Tutankhamun. His treasures, discovered by Howard Carter in 1922, are in the Egyptian Museum in Cairo, but his tiny, shrivelled mummy is preserved in tomb KV62, 3,342 years after his death.

Karnak’s temple complex is the grand finale to any Nile cruise, more lavish in scale than any of the others, statues 18-metres high gazing down on scurrying tourists, stars still shining bright in ceilings painted 3,000 years ago to depict the night sky. Late afternoon is most atmospheric, the light slanting through the forest of vast, papyrus-shaped columns in the Temple of Amun-Ra, one of the world’s largest religious monuments.

If pent-up demand for Egypt continues, though, you won’t always have these treasures to yourself. Money is being poured into tourism projects, in the private and public sectors. Sanctuary Sun Boat IV isn’t the only vessel to receive a makeover; sail on the Sanctuary Nile Adventurer and you’ll enjoy new, soothing interiors decked in luxurious fabrics and textures, as well as a new spa and open-air gym.

Timescales are fuzzy for the larger scale projects – but time moves slowly here. The billion-dollar Grand Egyptian Museum at Giza, five times the size of the Egyptian Museum in Cairo, is scheduled to open in October 2020. Assuming this actually happens after years of delay, Egypt and the Nile could be firmly in the spotlight next year, so don’t leave it too long to visit. Now really is the perfect time to go, to contemplate 7,000 years of history and the dazzling antiquities along the Nile in relative peace and quiet.

Feeling inspired? Browse our suggested Egypt itineraries or speak to one of our travel specialists today.