May 1, in Our Travels

Brandon Clements headed to India in search of tiger, visiting three of its greatest national parks.

Elusive, powerful and beautiful are all words that come to mind when one thinks of the most impressive big cat on the planet – the tiger. After years of waiting to see them in their natural environment, I was finally given the opportunity to do so on A&K’s In Search of Tiger itinerary. Ranthambore National Park is great for tiger spotting in northern India, but serious wildlife enthusiasts may prefer the jungles in the central Indian state of Madhya Pradesh. The national parks of Pench, Kanha and Bandhavgarh house some of the healthiest tiger populations in India, and sightings are good between October and early June – before the monsoon rains drench the parched lands of the subcontinent. 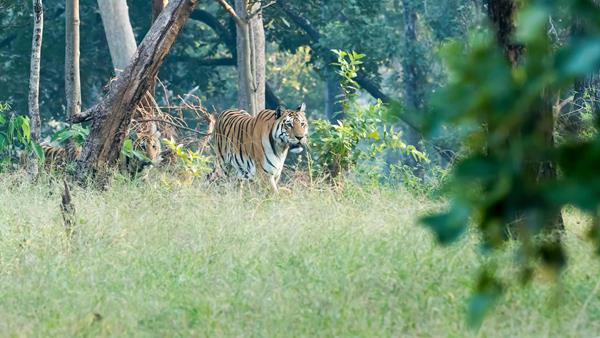 I embarked on my first game drive in the land of Kipling’s The Jungle Book, guided by the Taj Baghavan’s resident naturalist Varun. Although the early morning rise was difficult, my tiredness soon wore off as the excitement kicked in.

During dry season, Pench National Park sees daily temperatures in the low-to-mid 40s, forcing game to converge around the shrinking waterholes. This makes it much easier to see animals than at cooler times of the year. In the first few hours, we spotted all manner of wildlife: chital and sambar deer, langur monkey, gaur (Indian bison), as well an array of birdlife. With no tiger sightings by 09.00, we paused for a breakfast stop. I felt a bit apprehensive about exiting the Jeep, what with dangerous animals roaming the area, but Varun explained that tiger and leopard actively avoid humans and attacks are rare. After these reassuring words, we stepped out to tuck into a breakfast of warm paneer (Indian cottage cheese) paratha rolls, sandwiches and tea. While predators in national parks may go hungry if their hunt fails, humans certainly don’t.

Once we’d filled our bellies, our luck spotting tiger swiftly changed. Purposely taking the opposite direction to all the other Jeeps, Varun took us down a deserted track that led to a clearing overlooking a river valley. We stopped and listened to the sounds of the jungle, and Varun excitedly told us that he could hear deer alarm calls coming from further upstream. Monkey and deer are great big cat spotters; monkey spy them from the safety of the trees and vocalise their presence, whilst deer – who lack visual acuity – rely on their keen sense of smell, and make distress calls when alarmed. Moments later, only 20-30 metres away from our vehicle, a large tigress strolled out from behind some boulders and walked along the water’s edge. Varun informed us that we were looking at Collarwali (‘the collared one’), the most prolific breeding tigress on the planet. Including her current litter of three cubs, she has given birth to 26 cubs in total – a world record. No longer wearing a collar, she was a captivating creature with flame-orange fur and bold black stripes along the length of her body. As we admired her beauty, one of her cubs, a 15-month-old male, emerged to join his mother, followed by one of his brothers who paced along the river bank smelling the bushes. For the next half an hour, we watched the two cubs jump from boulder to boulder near the bank, play-fight under a large palm bush and then rest beneath the shade of a large banyan tree. This was a special moment to share with my fellow travellers. 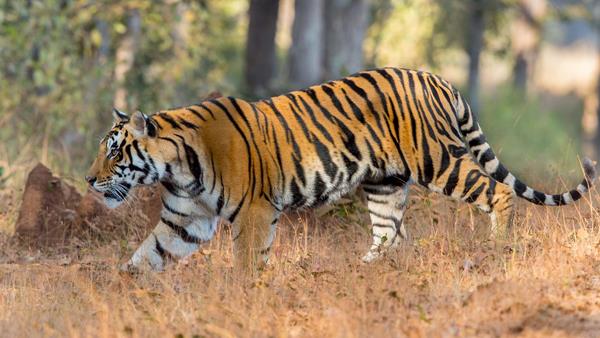 After bidding farewell to Pench National Park, we took the six-hour drive east along the tiger corridor to my next lodge, Taj Banjaar Tola in Kanha National Park. This camp is evocative of an African safari lodge, with its luxury tents and communal areas overlooking a picturesque stretch of river. Located in the buffer zone not far from the hub of the national park, wild animals regularly stray onto the property. I was told that only last month staff witnessed a leopard kill close to reception, and a tiger had descended to the river for a drink in full view of guests – who watched from the safety of the elevated deck. After a fantastic welcome, including a lantern-lit barbecue and a traditional dance show, we bedded down before our hunt for tiger.

Kanha National Park is the biggest and most scenic of the three parks I visited. The vegetation here is denser than Pench and dominated by evergreen sal trees, making it more difficult to spot game. Luckily, during our final drive, we caught a glimpse of what we were here for. Our Jeep parked beside a waterhole as alarm calls from deer rang out, and our naturalist guide assured us a tiger was nearby. Finally, a majestic tigress raised her head through the long grass. She sat looking at us for a few moments, mouth open and panting to cool down in the hot sun. Then she slipped back into the undergrowth, her stripes blending in perfectly with the shapes and shadows created by the sunlight on the forest floor.

The last national park I visited is a six-hour drive away from Kanha, in the north-eastern part of Madhya Pradesh. Although Bandhavgarh is significantly smaller than both Pench and Kanha, it boasts a denser population of tiger, so game viewing often proves more fruitful. I stayed at Taj Mahua Kothi, located in the buffer zone a short drive away from the main gate. The lodge is in a lovely setting with open grassy plains to its front, and a forested area with a little pool and deck at its back. All cottages – or kutiyas, as they are known locally – have a traditional, tribal appearance outside, but are luxurious within.

The sightings I had at Bandhavgarh were the most varied and enjoyable on my journey. During my first game drive, a large tigress emerged a few hundred metres away from us, drinking from a stream before disappearing behind cover. Later that afternoon, we saw three cubs playing in the long grass, stalking birds and chasing deer clearly too big for them. We also caught sight of their father Bheem, who – weighing in at close to 300 kilograms –  is one of the biggest and most dominant of the park’s tiger population.

On the final morning, we witnessed a very rare sight – a tiger kill. A few Jeeps had spotted a full-grown tigress resting beneath a bamboo tree, just off a dirt track. We positioned our Jeep close to a nearby waterhole, since the day was getting hot and she would have to drink sooner rather than later. After 10 minutes, the tigress appeared to our left, sitting briefly on the bank of the waterhole. She paced slowly towards the water to drink. From our vantage point only 15-20 metres away, we could truly appreciate what a powerful and magnificent big cat she was. Just like a domestic cat drinks from a bowl, she swished her tail to one side, lowered her body down and bowed her head at the water’s edge, lapping up the murky liquid with her tongue. She drank for a matter of seconds before a deer alarm call came from the bush. As soon as she heard the sound, her ears pricked up and her attention switched from her drink to her potential next meal. She dropped into stealth mode, her body low to the ground as she stalked four to five strides towards the source of the call. With lightning speed, she launched an attack on the isolated muntjac (barking deer). There was a brief scuffle, then silence. With beaming smiles, we headed back towards the park exit gates. 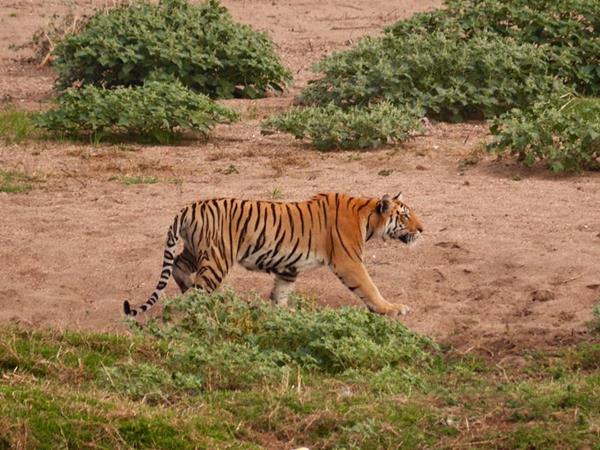 I rounded my travels off with a stay in metropolitan Delhi, a dramatic contrast to the wilds of India’s jungle. Amidst the clinking glasses at Oberoi Delhi’s rooftop bar, our group swapped stories of our tiger safari, enjoying the view of the India Gate lit up with the colours of the Indian flag. Although the orange of the flag represents courage and sacrifice, it could easily be symbolic of a certain big cat.

Eighteen tented suites are set on raised platforms, their wide glass doors opening onto private decks overlooking the river, offering panoramic views of the wilderness beyond