Why now is the time to visit Sri Lanka

Elusive wildlife, historic sites, and lush tea plantations: Sri Lanka’s appeal is transcendent, but go soon before everyone else does, says Sarah Marshall

Carved from a solitary plateau rising 200 metres from the jungle floor, King Kasyapa I’s mesmerising fortress is stately even by royal standards. An opulent complex of sky-high bathing pools and majestic fountains fed by monsoon rain, it’s a site better suited to a religious deity than a monarch. Although ancient frescoes of bare-chested women presenting platters of fruit and toying suggestively with lotus flowers suggest hedonism was the ruling spirit worshipped here.

But the silhouettes that once rippled in water features have been washed away by 1,500 years of history, leaving only the reflections of a cloudless sky. Today, one of Sri Lanka’s most popular tourist attractions is surprisingly empty, and when a handful of tourists disappear into the belly of a stone lion that lends this place its name, I have Sigiriya (or Lion) Rock and its hypnotising views all to myself. 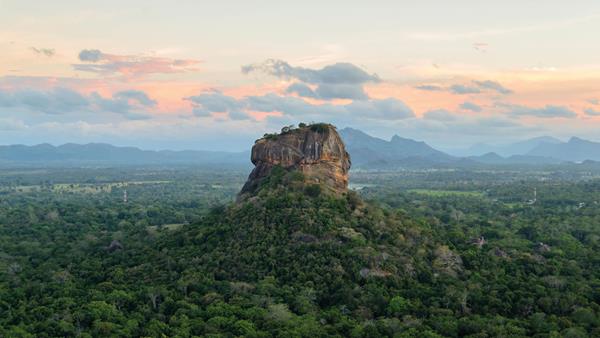 For the past few years, this Indian Ocean island had been riding high on a wave of tourism. Enticed by palm-fringed beaches, a fascinating culture, and exotic wildlife, visitor numbers were booming. But on 21 April 2019, everything ground to a halt. Targeting hotels and churches, the Easter Sunday terrorist attacks were devastating, creating shock waves which would continue to do harm for months.

The British Foreign Office joined 26 countries in issuing a travel ban, which was finally relaxed in June 2019. For hoteliers and drivers employed in tourism, the news couldn’t have come soon enough. “Fortunately, we managed to retain all our staff,” says Suraj Perera, general manager of the Water Garden Sigiriya hotel, which sits in a perfect eyeline of the Lion Rock. “But many places had to let people go.”

Designed by Channa Daswatte, a protégé of the celebrated architect Geoffrey Bawa, the property draws inspiration from the famous UNESCO site – from water channels reflecting the sunshine flashes of oriole birds, to walls made with mud bricks mirroring those used for the citadel’s stupas. It’s a place for peace and contemplation – made even more tranquil by the fact I’m one of only five guests in a complex of villas that could happily host more than 60. 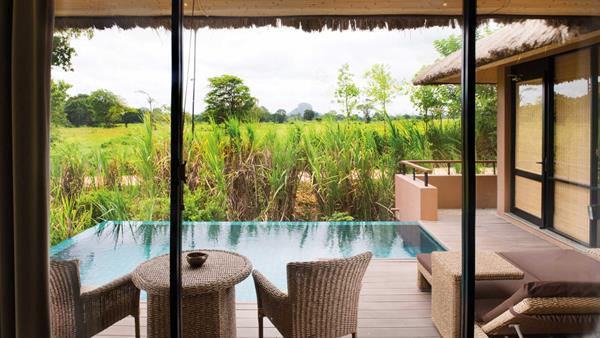 But the numbers will return. In August 2019, the Sri Lankan government waived visa fees for 48 countries including the UK for six months in a bid to lure back tourists, and this helped bookings rise. And for those willing to travel sooner rather than later, there’s still a chance to enjoy the island’s most popular sights (relatively) crowd-free.

Reliably large gatherings are guaranteed in the nearby Minneriya National Park, however, where a reservoir constructed 18 centuries ago is the largest known meeting point of Asian elephants in the world. In the dry season, from May to September, hundreds come here to drink. 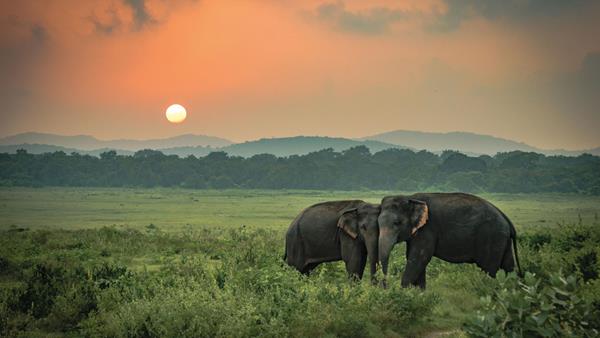 During my afternoon drive, only a few vehicles trundle around the vast body of water, where pelicans glide like a flotilla of sailing boats. Two young bulls lock trunks in a squabble over feeding grounds, while a calf chases snow-white egrets in a race she’s destined to lose. The wildlife sightings are impressive, but even more notable is the behaviour of the drivers: once criticised for their poor knowledge and lack of animal awareness, they now carefully follow a protocol.

The transformation is the result of training from the Federation of Environmental Organisations, which has been tasked by the government to improve the standard of drivers in Sri Lanka’s national parks. It’s a fine example of how the quiet time has been used constructively to support the country’s gradual bounce back.

This ability to keep smiling is a large part of the island’s appeal. From roadside stallholders cleaving open king coconuts to Ayurvedic doctors cultivating aromatic spice gardens, everyone is warm and welcoming, and life ebbs and flows at a leisurely pace.

And then there’s the colour: the white-sand beaches, jade-green highlands, and curries in a sunset of blazing hues. Most dazzling of all are the religious festivals, although every day is a cause for ceremony and celebration in central city Kandy, the last kingdom to fall to the British Empire in 1815. Dressed in crimson sashes, drummers introduce an evening pooja (prayer ritual) at the 16th-century Temple of the Tooth Relic, where I join pilgrims queuing to offer lotus flowers and lilies to the Buddha’s tooth. Considered too precious for public display, the keratin jewel is hidden inside a gold casket, and revealed for only five minutes each day. Equally deserving of devotion is an octagonal sandalwood library housing books bound with palm leaves, some almost 1,000 years old.

On the manicured lawns of the Kings Pavilion hotel, perched on a hill above the city, I’m given a marvellous taste of the type of spectacle Sri Lanka is famed for. Performers from the Sri Anura dance school spin and somersault in a jangle of elaborate costumes, although Master Ruwan steals the show by basting his body and walking through flames. You can find them performing every evening in Kandy’s Red Cross Theatre from 17.00.

Less frantic and fiery, my next stop is Haputale in the heart of Sri Lanka’s tea country, passing the golf courses and mock-Tudor houses of Norelia (also known as Little Britain) and into a region of undulating hills in vibrant shades of green. Tamil women carry wicker baskets stuffed with leaves and a bitter smell wafts through the open windows of busy factories. 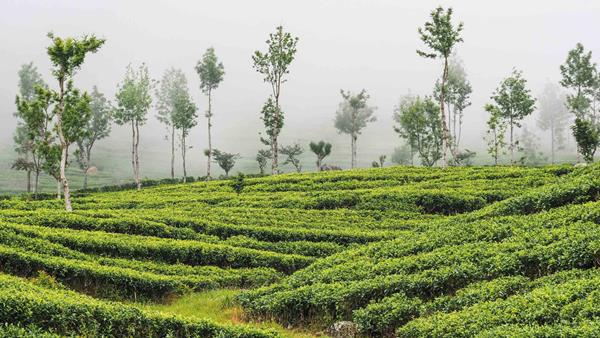 Scottish tea baron Sir Thomas Lipton would survey his verdant empire from the viewpoint at Lipton’s Seat, but an even more impressive panorama is reserved for guests staying at Thotalagala, a former tea-planter’s bungalow transformed into a colonial-style seven-room boutique hotel. Cabinets filled with trophies and decanters reminisce about the bygone grandeur of Ceylon, but it’s the sight outside – where an infinity pool spills into mist-shrouded valleys – which proves there’s nothing more beautiful than the here and now. 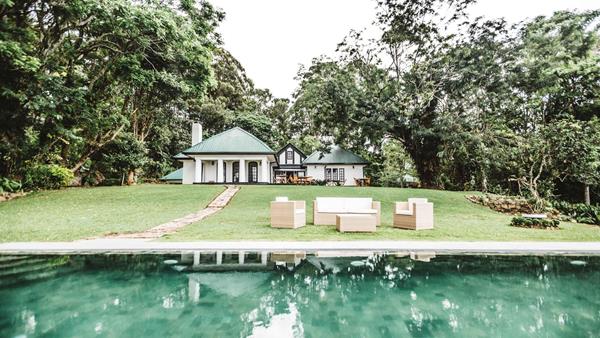 There’s no doubt Sri Lanka’s tourist industry has suffered a blow, but in some places a reduction in numbers has provided a much-needed opportunity to take stock. Credited as having the highest density of leopards in the world, Yala National Park is a premier wildlife destination. Yet, a failure to cap the number of daily visitors has caused outrage, with tales of up to 70 vehicles jostling over a sighting in the popular Block 1. 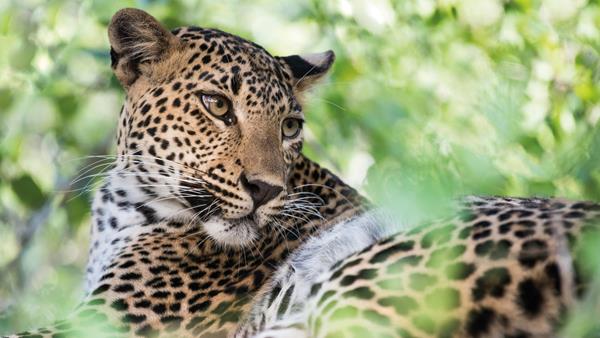 Fully aware of these issues, safari camp Leopard Trails prefer to find their own sightings rather than join a throng of Jeeps connected by the park’s increasingly clear mobile phone network. Stumbling upon muscular male leopard Harak Hora (‘the buffalo killer’), we have a rare few minutes alone with the cat. It’s a similar story with sloth bear Ballsy, who we watch searching for sugar-rich berries at the base of an ironwood tree. These intimate, sensitively controlled sightings demonstrate just how wonderful this park can be if numbers are properly managed.

When Sri Lanka came under attack in Easter 2019, we all cried for the teardrop-shaped island. Having suffered a savage civil war and catastrophic tsunami, another blow seemed cruelly unfair. But now the doors are wide open for visitors, and smiles have replaced the sadness. This colourful, charismatic, and endlessly charming island is stronger than it’s ever been.

Feeling inspired? Browse our suggested Sri Lanka itineraries or speak to one of our travel specialists today.