A journey into Mongolia

Author & photographer: Jan Masters is a freelance writer, having been a magazine editor for many years. She is a frequent contributor to A&K’s biannual Sundowner magazine

Being woken in the middle of the night by a stranger. Hmm. Never thought I would look so positively on such a prospect. But here in my ger (Mongolian yurt) in the brisk autumnal temperatures of the Altai Mountains, I hear the ger manager arrive in the early hours. He’s lighting the wood-burning stove with its tall chimney that is the structural, practical, and emotional hub of my temporary home so that when I rise, I’m toasty rather than teeth-chatteringly freezing. Let the fire-lighting commence. 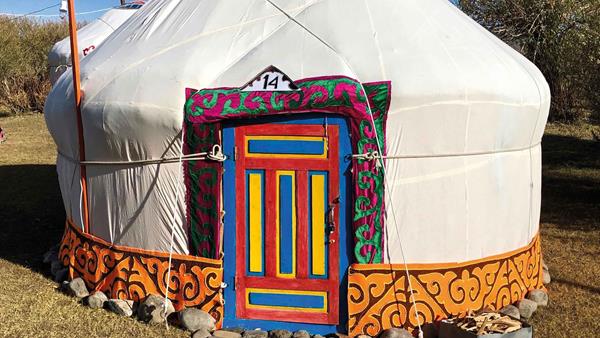 A ger in A&K’s private camp, erected especially for the festival

And there is another fire that Mongolia ignites in the soul of any visitor who’s open to big skies and even bigger adventures. Landlocked, with Russia to the north and China to the south, it’s a country of sweeping steppes and arid deserts. Of ragged mountains slicing too-blue-to-be-true skies. Of gazillions of sheep and goats grazing vast swathes of wind-whipped pastures. And with a history that still reverberates with tales of Genghis Khan, who from the early 13th century, established the mighty Mongol empire. 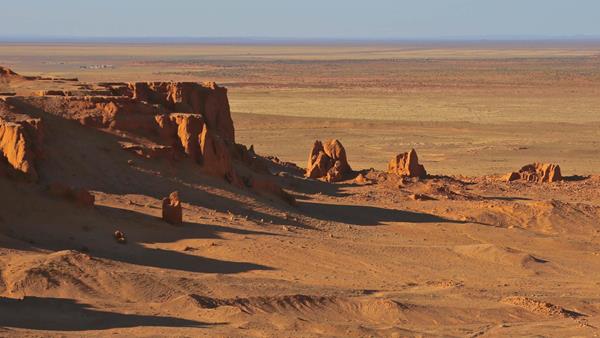 The Flaming Cliffs in the Gobi Desert

So you get the picture. This is no ordinary, run-of-the-villa type holiday. There will be times, like when you hear the thrum of a generator thud out, that for once in your pampered life, the phrase ‘out in the middle of nowhere’ has real meaning. You’ll also meet nomadic people whose way of life is not so different from that of their great, great ancestors (give or take the odd solar panel, mobile phone, and motorbike).

There will also be moments when you simply breathe in the beauty of emptiness. Because while Mongolia is similar in size to western and central Europe, it has a population of just over three million – London alone has nearly nine. In short, Mongolia gives you spatial perspective in spades. 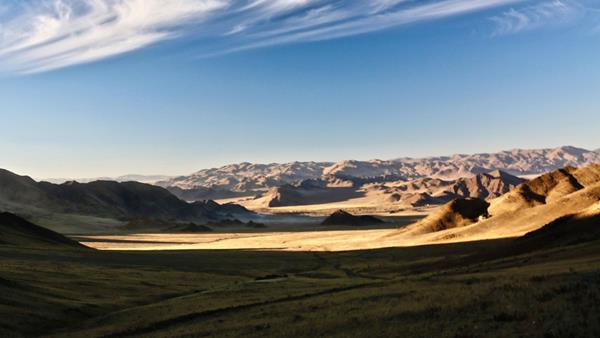 More visitors are heading this way, a fair few because they’ve seen the film The Eagle Huntress, about then 13-year-old Aisholpan Nurgaiv, who hunts with eagles on horseback and has won the annual Golden Eagle Festival in Olgii (she now hopes to be a doctor). I haven’t seen it, but it has attracted many, including the elderly woman from California who I meet on the plane from Moscow to Ulaanbaatar (UB), the capital city. Travelling alone, she continually shuffles pages of her itinerary, repeating the mantra that she just had to come.

My inspiration was a talk at the Royal Geographical Society in London that put Mongolia on my must-see list. So here I am. Bedding down in my ger near the Kazakhstan border, having flown in from UB to Olgii with 17 fascinating fellow travellers. I met them at the start of our holiday at the Shangri-La, all guests on this limited-edition Luxury Small Group Journey, of which the Golden Eagle Festival is one of

the many exciting prospects. 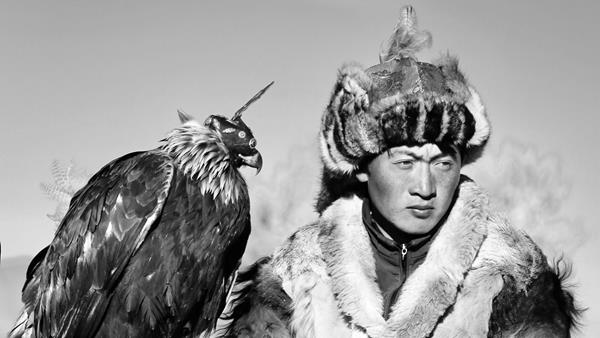 A Kazakh horseman with his eagle

We are ably shepherded by our man on the ground, Amarbuyan Yura (Amraa) and host Palani Mohan, an award-winning photographer and author of Hunting with Eagles: In the Realm of the Mongolian Kazakhs. He is the perfect cultural commentator, having researched and documented the proud people who inhabit this unforgiving landscape, where winter temperatures routinely drop to -40°C.

In toughening up for the trip, I don’t make the best start. On the runway in Olgii, I miss my footing and crash-land on my knees. We decide a bag of ice might help the pain but is an unlikely find. Frozen peas? Again, pass. However, a shopkeeper sells us their last two packets of frozen prawn dumplings. Somewhat unglamorously, prawns poised, I am driven in convoy to camp.

The Lilliputian village of gers soon puts a smile on my face. It’s been erected just for us for three nights, near to a rushing silver river edged with ribbons of golden trees. Each ger has a Hansel and Gretel doorway and is decorated inside with embroidered wall hangings. There’s a shared shower, for which you make an advance appointment, and a kitchen that creates tempting food, from full-on breakfasts to multi-course suppers with soups, and meat and vegetable dishes — the wine flows.

As we wake to the sunniest of days, we head out to the festival, which takes place on a stretch of, well, dust, in the shadow of a huge, sheer escarpment. Launched in 1999 to preserve cultural traditions, the Golden Eagle Festival has evolved into a two-day event with over 100 horsemen and women in their finery, attending with their eagles to compete in various competitions to showcase their riding skills and close bond with their birds – think a falconry display at a county show but with a more rugged, Wild West vibe. 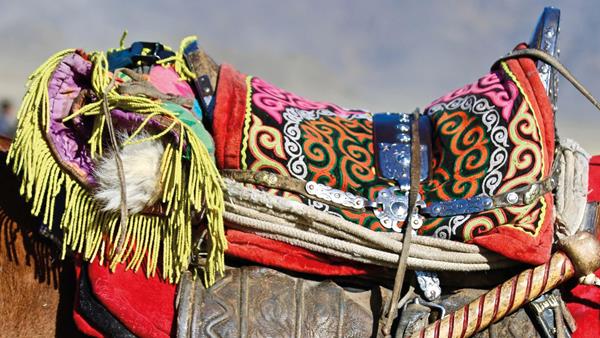 The hunters (burkitshi) are ethnic Kazakhs and over the centuries have survived some of the harshest conditions Mother Earth can throw at them. It’s mostly older hunters who remain: younger generations are tending to head to urban areas. However, there is a still a passion for falconry and the trained eagles (always females, as they are more powerful than the males) live with their hunter for several years, before they are released back into the wild. Some birds develop such a bond, they fly ‘home’, and the release has to be repeated.

Over two days, we first see the hunters judged on sartorial flair. Then, how quickly their eagle can land on their arm when released from the mountainous peak – the rider waits on the showground far below and the descent is timed, as in sheepdog trials.

Some birds go like guided missiles. Boom. Land. Cue explosive applause. Some, they take an easy-does-it detour before deigning to descend. There are also equestrian displays with riders picking up coins while their horses gallop full tilt, a tug-of-war on horseback, another game where the woman whips the man (I never figure out why, but a delighted pair win first prize), plus camel races and archery. 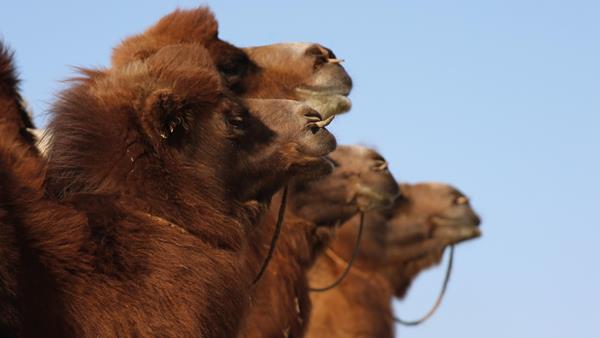 Camels in the Gobi

After a final cosy dinner in our rustic camp, it’s back to UB to prep for the next adventure – the Gobi Desert. UB itself is worth exploring, from the fascinating Natural Museum of Mongolia to the Gandantegchinlen Monastery, one of Mongolia’s most revered. Plus there are cashmere shops galore and the Shangri-La, a shrine to all those things we take for granted – but shouldn’t – like hot water, heat, and light. 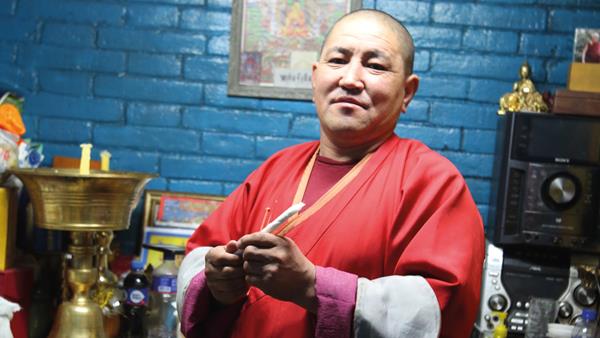 A monk prepares for a ceremony at Gandantegchinlen Monastery in Ulaanbaatar

A short flight to Dalanzadgad drops us into the South Gobi. Our base is at the Three Camel Lodge, a permanent ger camp with en-suite facilities and a great bar. Meals are expertly prepared, the wine and whisky list on a par with many capital city hangouts, and the cabaret includes traditional music and throat singing, which is hauntingly beautiful.

It’s from here we head out to ride Bactrian camels on the dunes of Moltsog Els and meet nomadic camel breeders and take hikes in idyllic scenery, where horses drink from streams in the foothills of monolithic mountains. On our final evening, we walk the Flaming Cliffs, incandescent at sunset. A significant palaeontological site, if you know what you’re looking for you can still find tiny remnants of dinosaur eggs. Three Camels has thought of everything and brought along sundowners, chairs, and umbrellas. We toast a trip, wild in concept, wonderful in its welcome.