The Kimberley is Australia’s last frontier, a remote, immense wilderness, ripe for exploration by pioneering travellers.

Ah, Australia. The Lucky Country. Home to Sydney’s iconic Opera House; Melbourne’s famous food culture; Queensland’s Great Barrier Reef; and a world-renowned surf scene. Plus, more deadly flora and fauna per square metre than in any other part of the globe. Yet there’s a part of this sunburnt country that few people visit. A vast and beautiful landscape of red dirt as ancient as the country’s Aboriginal history and as far away from the Aussie stereotypical cork hat, laid-back attitude, and stubby of cold beer as you can get. It’s the Australia we often read about but don’t often witness. It is the Kimberley.

Revered as being one of Australia’s last frontiers, the Kimberley occupies almost 17 per cent of Western Australia, stretches for 421,000 kilometres and is as idiosyncratic as it is extreme. Home to sacred indigenous rock art, caves, and shelters as well as crashing waterfalls, rugged coastlines, unforgiving deserts, and limestone ranges, the isolation of this part of the planet only adds to its beauty. But when it comes to exploring an area as large as the Kimberley, it can be hard to know where to start. So, let’s begin at the bottom, in Broome. 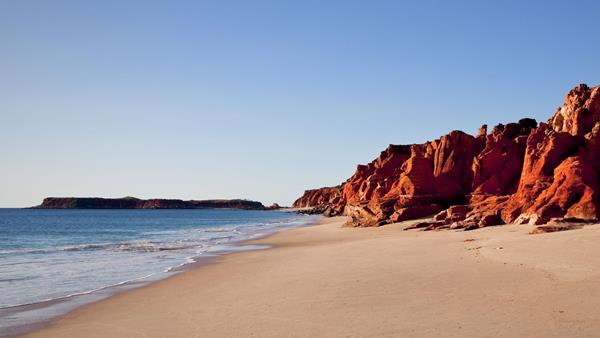 It may be known as the gateway to the most southern part of the Kimberley, but Broome is unlike most other gateway country towns, in that people tend to stick around rather than simply pass through.

Broome had to quickly reinvent itself when the arrival of the plastic button rendered its mother-of-pearl industry obsolete almost overnight. Luckily Broome is gorgeous, so when the town switched its focus from trade to tourism, business continued to boom.

At its most popular during the dry season (April to October) Broome’s beauty is apparent 24/7, but it really comes alive at sunset – particularly if you’re lucky enough to witness the Staircase to the Moon. This natural phenomenon happens when the full moon rises at a low tide and casts its glow over Broome’s exposed mudflats. What’s left is a stunning optical illusion of golden steps rising out of the Indian Ocean. It’s best seen from Roebuck Bay, but you can catch it all along the coast. It’s also worth playing the tourist and taking part in a sundowner camel ride across the renowned Cable Beach. But if clambering atop an even-toed ungulate isn’t quite your thing, then take a book and experience the beauty of Cable Beach during the day. 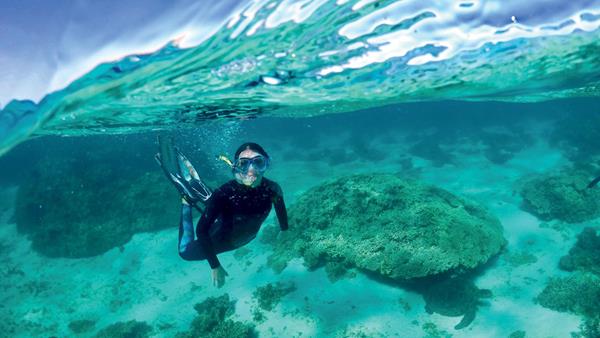 A UNESCO World Heritage Site, Ningaloo Reef is Australia’s ‘other’ great barrier reef. Technically a fringing reef, it has more than 500 species of fish living in its waters, plus humpback whale. Swimming and diving with these gentle giants tends to be what attracts people to Ningaloo, but if you’re less keen on large mammals and more a fan of a relaxed snorkel, then there’s plenty here for you, too. Head to the small town of Coral Bay where, 500 metres south of Bills Bay, Purdy Point is a revered snorkelling spot where you’ll drift over coloured coral and spot everything from sea cucumbers to mini rays. One of the best snorkelling sites in the area, however, is the Turquoise Bay Drift, where coral gardens swarming with fish can be marvelled at only metres from the shore. It’s worth noting that the Turquoise Bay Drift is recommended for experienced swimmers only due to strong currents, but those less able needn’t miss out as Oyster Stacks is an ideal spot for families and inexperienced snorkellers within the coral reef. 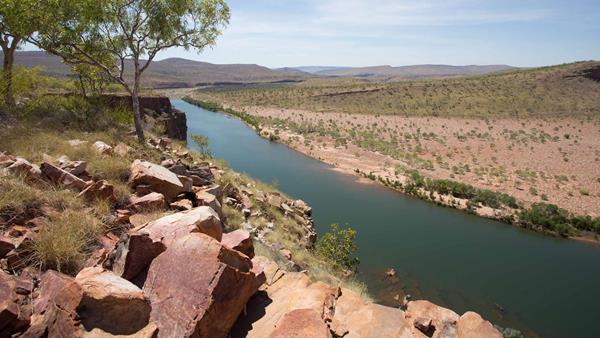 The remoteness of the Kimberley is both its blessing and its curse as, yes, it’s beautiful but, boy oh boy, do you have to work hard to see it. A trip to El Questro Wilderness Park, however, is well worth the flight north. Or, if you’re feeling a tad more adventurous, jump into a four-wheel drive and take the rugged Gibb River Road here. It’s clichéd to describe El Questro as magical, but there’s no other word for it; its nearly 300,000 hectares of mountains, valleys, and gorges is Mother Nature at her finest.

It’s worth spending some serious time in El Questro and there are many places you can choose from to rest your head. Pitch a tent in the Black Cockatoo Campground; hire a family-friendly bungalow in The Station; choose one of Emma Gorge’s 60 safari-style tented cabins (complete with en suites), hidden amid the Kimberley’s fiery red Cockburn Range; or go all out and stay in luxury by booking one of the El Questro Homestead’s nine suites. Cantilevered over the Chamberlain River, the Homestead is an El Questro experience all of its own – so sought after that when Nicole Kidman was filming Baz Luhrman’s Australia, she found it fully booked and had to stay in a neighbouring town.

Once happily ensconced in the Homestead, guests are offered complimentary excursions where you’re encouraged to fully immerse yourself in a Kimberley experience. Swim in waterfalls, fish for barramundi, bask in the shade of a boab tree, soak off the day in the mineral-rich Zebedee Springs, or take a helicopter tour and witness the sheer size of this incredible part of the world. 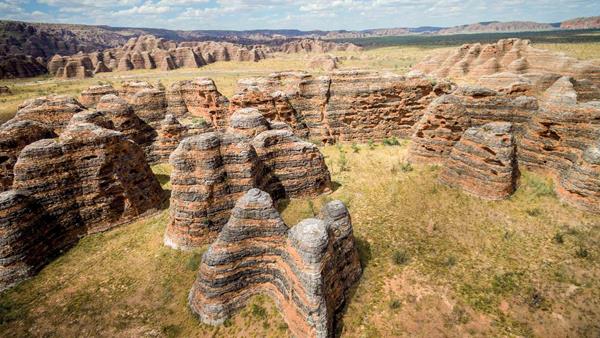 It may sound as if it was named after a character from a kid’s TV show, but the Bungle Bungle Range is El Questro’s most famous neighbour. These stunning rock formations are found among the remoteness of the Purnululu National Park and have been sculpted by millions of years of erosion into the tiger-striped, beehive domes they are today.

The Bungle Bungles are best viewed from above as it’s only when you look down that you begin to appreciate the sheer scale of this fascinating and fragile rock massif, which stretches over 240 square kilometres. If you’re keen to explore by foot, then a number of the canyons are open to visitors and tour guides are ready to show you around. And if you’re staying in El Questro Wilderness Park, a ranger can help to arrange a day trip for you. 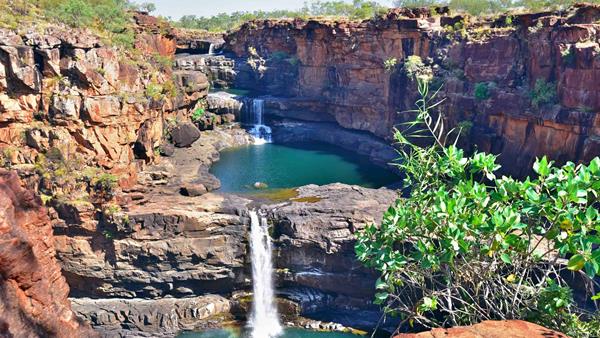 Utilising all travel options available to you is the only way to see everything the Kimberley has to offer, which means getting out and about by land, sea, or air. A few must-dos are to make sure you take the time to kick off your shoes and take a walk down Silica Beach – named for its powdery soft, white silica sand. Hop aboard a boat and take a trip to see Horizontal Falls, an experience David Attenborough called “one of the greatest natural wonders of the world”, and, let’s face it, he’s seen a few. Take a helicopter ride over the top of the sandstone-carved Mitchell Falls and then, before you head back to civilisation, take a moment to stop, look around, and really take in everything this historical and mythical part of the world has to offer.

A&K's 12-night escorted expedition cruise to Kimberley: Australia's Last Frontier in 2019 starts at £10,300 per person (based on two sharing, excluding flights). For more information, enquire online or call one of our escorted tour travel specialists on 01242 547 892.