When to go to Tanzania 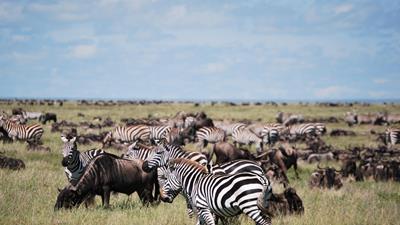 Between January and March, the Great Migration takes place in the southern Serengeti. With the rains on the horizon, this is also calving season for the herds, with zebra giving birth in January and wildebeest in February. All this activity attracts a lot of predators, making this an excellent time to witness the migration.

Due to the scarcity of water, Tarangire National Park is a fantastic area to view wildlife - its permanent marshes and pools attract animals of all sizes.

This is also the best time to trek Mount Kilimanjaro. Typically, early mornings on the mountain are sunny and dry, with clouds forming by noon. It’s possible to hike Mount Kilimanjaro at any time of year, but it can become more difficult during the rainy season.

Music fans should head to Zanzibar in February. This is when Sauti za Busara, a popular African music festival takes place, with street carnivals and live music events happening across the island.

Visiting Tanzania in April & May 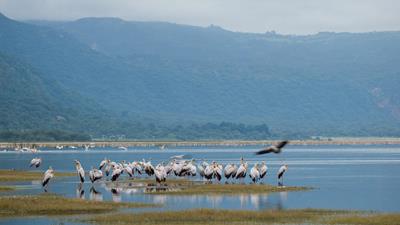 With the arrival of the wet season in Tanzania, the landscape turns lush and green. The rain usually falls in short showers, with bursts of sunshine in between. The resulting plethora of colour and light makes this the perfect time for photographers. During this ‘green season’, visitor numbers tend to be lower than usual. With fewer visitors, you may find you have some of the reserves and parks all to yourself.

During April and May, the Great Migration will leave the plains in the south and move into the central and western corridors of the Serengeti. Here they’ll find food and shelter in the shaded woodlands and areas of the Grumeti reserve. When the wildebeest and zebra attempt to cross the Grumeti river, the resident crocodiles enjoy their annual feast. 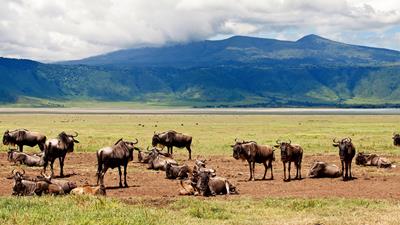 These are the country's coolest months, and in the aftermath of the rains the wildlife is abundant across Tanzania. Between June and August, the Great Migration will move north, eventually crossing the Serengeti’s northern border into Kenya.

September marks the start of birding season in Tanzania. With winter approaching in Europe, migratory birds begin to fly south toward the warmer climes of Sub-Saharan Africa. Some beautiful native species can also be found in the Rift Valley. 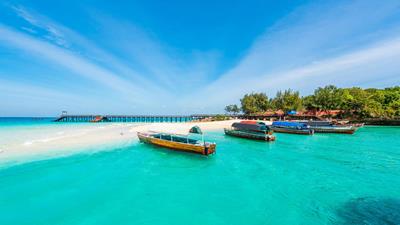 As autumn begins in the Northern Hemisphere, the South’s equivalent tropical spring gets underway. The days are warm and the evenings cool. From September onwards, we recommend a trek into the Mahale Mountains to see chimpanzee. With the fruit trees on the lower slopes providing an easy source of food, the chimps will be closer to the shores and easier to spot.

Short, scattered rain showers fall throughout November, helping to freshen the air and settle the dust. Even with the rain, it’s still warm enough in this tropical climate to enjoy a boat ride or an afternoon fishing on Lake Tanganyika, the deepest lake on the African continent.

If you want to escape the winter chill back home, Tanzania is an ideal beach holiday destination. Opt for the idyllic white-sand beaches of Zanzibar — the less-visited islands of Mafia and Pemba offer unspoiled shorelines and opportunities for simple relaxation.

The long journey to Greystoke Mahale is without question worth it, this tiny sanctuary is very possibly heaven on earth

Zanzibar and the coast, Tanzania

This itinerary follows the scenic Machame Route to the summit, allowing extra time to acclimatise to the altitude. Ideal for amateurs and experienced mountaineers alike, enjoy unrivalled equipment and certified guides

Get fully focused on the fauna of Kenya and Tanzania on this 12-day safari. Spot wildlife in the best national parks and game reserves, and experience African hospitality at its finest

Our favourite photos of Tanzania

With an extensive knowledge base and expertise covering 54 diverse and fascinating countries, our Africa team is perfectly placed to help plan your next adventure
Meet the team