January 8, in Our Travels

There are more dramatic and beautiful mountains in the world to climb, and many less-frequented summits to reach. However, the draw of Kilimanjaro will continue to attract the adventurous for years to come – as our travel specialist Ben Harrison attests

The gods of the mountain had been kind to us so far. In the four previous days of the climb the rainfall amounted to little more than a few light showers, and on each occasion it fell only when we’d arrived in camp and could seek refuge within our tent. Deciding to take on Kilimanjaro in mid-October did have an element of risk, as the onset of Tanzania's rains approached, though we thought it a worthwhile gamble since visitor numbers are fewer around this time. But as I looked up to where the mountain should have been, I was greeted instead by thick cloud and an impending sense of inevitability that this gamble was about to backfire. 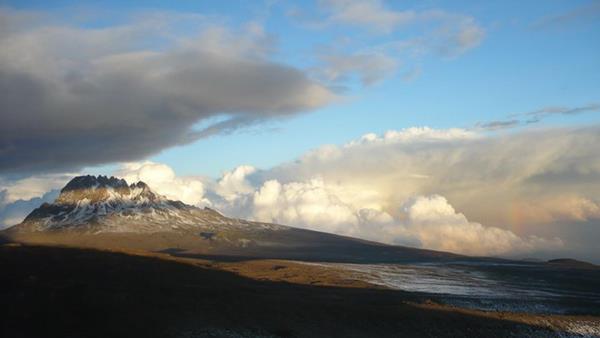 Two hours later, Barafu Camp was our base before the final ascent that evening. We found ourselves sheltering in the mess tent from the heavy and prolonged snow shower outside. I cast a glance towards my mother, the only member of the family intrepid enough to accompany me here. In the narrow gap between her zipped-up fleece and pulled-down hat, there sat a concerned pair of eyes. Though the gap widened and the expression lightened as the unzipping of the mess tent was accompanied by the magic words, "welcome, soup". Jackson, our chef, was a miracle worker at altitude, and his variety of soups, all made from scratch on the mountain, were swiftly becoming the stuff of legend. The greeting "welcome" from Camp Manager Ismael seemed to precede the delivery of all things good and warming: "welcome, coffee" to wake us in the morning; "welcome, porridge" or "welcome, bacon and egg" for breakfast; and "welcome, hot water" enabled us to have a good wash before dinner. The list goes on, but it goes without saying that all such offerings were, indeed, exceedingly welcome.

"The snow will stop soon, and if there is some snow on the ground it will insulate the ground, making it warmer this evening for the final ascent". Our guide's revelation prompted a moment of quiet contemplation, followed by a shared, furtive glance of disbelief. So far, we had had no reason to doubt Dismass' logic; his guidance and tips on how to breathe efficiently had got us to base camp at 4600 metres with relative ease. 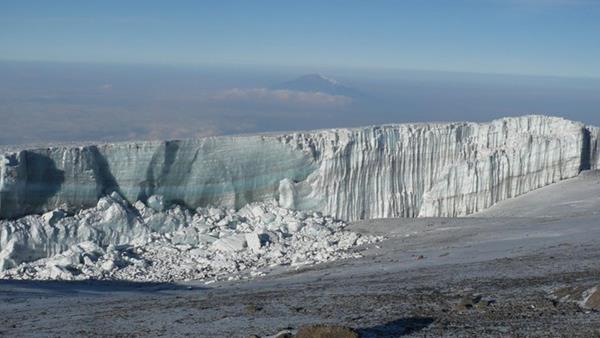 The snow eased off then stopped altogether by late afternoon. The sun emerged and, in combination with the fresh carpet of snow, afforded us breath-taking views of Mawenzi (one of Kilimanjaro's three peaks) to the East. The focus of our attention, however, remained blanketed in cloud. It was almost time for the next of our two planned meals before we were due to leave camp at 11.30pm. It was incredibly important to keep our energy levels up, and anything other than empty plates at the end of a meal was met with disapproving looks from Dismass. Mum, after one particularly large lunch, alluded to the plight of Perigordian geese, however we both were aware of the necessity to refuel after each day of walking. 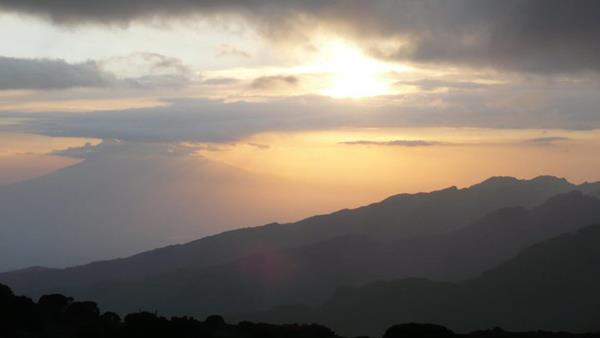 As the sun set behind Mount Meru, Africa's third highest at 4566 metres – we were already higher than this, but only just – the temperature quickly dropped. We were advised to try to get some sleep before a light 'breakfast' at 10.30pm. And though we didn't get much sleep, at quarter to midnight, layered up like the Michelin Man, we left camp. The final ascent of most of Kilimanjaro's six primary routes begins at night. It’s best to get to the summit around dawn, when the views are optimal.

We soon had to remove a few layers. It looked like Dismass' prediction about the snow insulating the ground may not have been too far wide of the mark after all. For the past five days we’d been getting used to walking at an incredibly slow speed, regularly being outpaced by the four striped grass mice that darted from rock to rock around camp and alongside the paths. But now, as the path steepened to a series of switchbacks, we understood the need to get used to walking slowly. We physically could not have gone any faster.

We had seen many of the same faces on the trail over the previous five days. By now, everyone looked identical, a meandering line of head torches snaking way ahead, leading above into the darkness. To spend too long watching those furthest ahead could prove disheartening. We were advised to concentrate on putting one foot in front of the next, a strategy that, along with our now-perfected breathing techniques, got us up to Stella Point. Here, the mountain flattened out, just as the orange sun rose a little after six am.

From Stella Point there’s still a 45-minute walk to Uhuru Peak, and our guide was keen to keep moving. My attempts to garner some recovery time by taking a few photos were quickly nipped in the bud as Dismass took my camera, rattled off four photos, one in each direction, before handing it back and gesturing that it was time to move on. In hindsight, it was sensible, as the elation of seeing the equatorial sun rise over Mawenzi was quickly replaced by the realisation that, after six and a half hours already completed, a 45-minute walk was no stroll in the park at this altitude.

By this point, some of the sprightlier among us were making their way back down from the summit. Words of encouragement were offered and received with mixed emotions as views opened out toward Mount Meru over to the West. By this point Meru looked small in comparison, and our focus quickly switched to the glacier in the foreground. To see a glacier this close to the equator was nothing short of spectacular. One face was a stunning shade of cyan blue, where a chunk appeared to have recently sheared off – a stark reminder of Kili's ever receding hairline.

As we approached the summit, we passed one or two people who were gathering their thoughts, their breath and, most importantly, their resolve for this last, short push. This had not been an easy climb. Seeing others who didn’t seem to be faring up as well as ourselves made us increasingly thankful for the pace that had been set for us, as well as our guide's invaluable assistance in monitoring our progress at each stage. The value of our twice-daily meetings with the pulse oximeter, initially something of a mystery to us, now became patently clear. It’s impossible to underestimate the importance of efficiently breathing to maximise exhalation of carbon dioxide and make optimal use of the less dense supply of oxygen at this altitude.

But we made it. On the summit the weak early morning rays of sun weren’t providing much warmth at all. Endless carpets of cloud radiated out to the horizon in every direction, thousands of metres below. Kenya's Amboseli National Park would have been just to the North, and only Mount Meru broke the surface of the cloud to the west, pluckily poking through, reminding us that it too was worthy of consideration. We took a few minutes to take it all in, each trying to immortalise the moment in our heads. We stood under the famous sign at Uhuru Point, and it was with a mixture of relief and disappointment at having to leave so soon that we said our goodbyes to the roof of Africa.

There are unquestionably more dramatic and beautiful mountains in the world to climb, and certainly many less-frequented summits to reach. However, the draw of a Kilimanjaro tour will continue to attract the adventurous for years to come. I, for one, was particularly proud to be one of them.