Live like a maharajah in a Taj Grand Palace

During your luxury holiday to India, walk in the bejewelled footsteps of Indian royalty and stay in their opulent palaces. Step back to a time when a maharajah was welcomed home by his herd of elephant, and boasted bath tubs equipped with perfume taps. Today, you can dip into this bygone era by staying at four of the Taj Grand Palaces: Umaid Bhawan Palace, Taj Falaknuma Palace, Taj Lake Palace Udaipur or Rambagh Palace

Arrive at sunset and you’ll be treated to the welcoming golden glow which radiates from the marble and yellow sandstone beauty of Umaid Bhawan Palace. One of India’s last great palaces is perched above the desert capital of Jodhpur, known as the ‘sun city’, nestling in the centre of Rajashtan. Uncover the secrets of the Maharajah of Jodhpur during a walk through the peacock-filled gardens, dotted with croquet lawns and collection of vintage cars.

Expect the unexpected during a visit to this Taj Grand Palace. 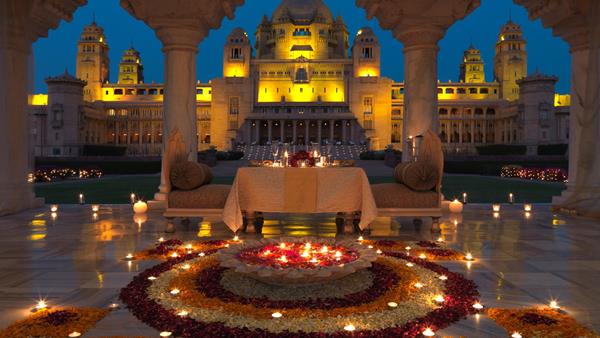 Umaid Bhawan Palace was designed by British architect Henry Lanchester in 1943. Its majestic 32-metre high dome is influenced by the Renaissance and Rajput tradition. While the royal incumbent Gaj Singh II still lives in part of the building, you can stay in one of the 94 palatial hotel suites decorated in an Art Deco style with patterned tile floors and antique furniture.  The royal palace has 64 rooms houses a museum which holds an eclectic mix of artefacts from a flag presented by Queen Victoria, quirky clocks and classic cars.

Live like a maharajah during your stay and enjoy a private dinner, served in the grounds by your butler. Relax in the Jiva Grand Spa or take a leisurely dip in the outdoor pool set in the beautiful 11-hectare gardens before sampling local cuisine in Risala restaurant.

The palace is located on Chittar hill above Jodhpur, known as the ‘Blue City’. After strolling the streets to shop for textiles and furniture head to the beautiful fringes of the Thar Desert on the city's doorstep. Jodhpur is also a name synonymous with riding trousers. The younger son of the Maharajah of Jodhpur popularised the style when he visited England to play in a polo match during Queen Victoria’s Diamond Jubilee in 1897.

Stay in the ‘mirror of the sky’ at Taj Falaknuma Palace

Look up into the sky above Hyderabad and you’ll see the shimmering sight of one of the most magnificent palaces known to King and man alike, the Falaknuma Palace. Built in 1894, the name Falaknuma means ‘mirroring the sky’ which is reflected in the construction of this grand palace that embodies the spectacular moods of the sky. 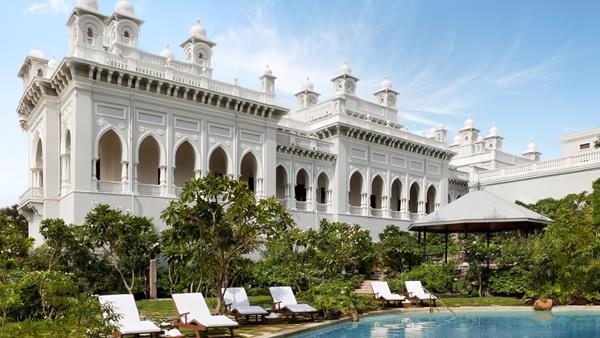 Perched more than 600 metres above the city of Hyderabad the palace was built by the then reigning Nawab Vikar–Ul-Umra who commissioned British architect William Ward Marret in 1884. Laid out in the shape of the astrological sign scorpio, this magnificent edifice took 10 years and 4 million rupees to complete.

It is believed to have taken 22 years to be decorated. Adorned with Venetian chandeliers, rare furniture, grand marble staircases, fountains, priceless statues along with objects d'art, stained-glass windows, unique sketches and murals encased in ornate frames the palace is a space dedicated to the art of perfecting pleasure. One of the preserved bathrooms even has a tap for ‘hot’, ‘cold’ or ‘perfume’.

In 1897, when the sixth Nizam of Hyderabad Mehboob Asif Jah, who was also the brother-in-law of Prime Minister Umra visited the palace, he was so taken by the beauty the latter decided to gift it to the Nizam. Too gracious a gift to be accepted by the richest man in the world; the Nizam instead bought the Palace and lived there until 1911.

Adding to its grandeur is the palace library, believed to be a replica of the one at Windsor Castle, and home to 5,900 books. Nizam brought back rare furniture, manuscripts and books from around the world that are still part of the palace’s treasures. Replete with billiards rooms, smoking rooms, pools, ballrooms, croquet lawns, private gardens, a dining room to seat 101 guests at the world's largest dining table, turret rooms, stables, terraces with views of the city, a private petrol pump and royal garages filled with a fleet of vintage cars serve to be just some of the known pleasures and comforts of this sumptuous royal abode.

The Taj Hotels Palaces Resorts Safaris has since lovingly restored the Palace’s 60 rooms over a decade, with the guidance of Princess Esra, wife of HEH the Nizam VIII Mukarram Jah. Enjoy your own splash of luxury with a treatment in The Jiva Spa or take a dip in the heated swimming pool. Indulge in authentic Indian cuisine at Adaa, to specialities at Celeste, breakfast and afternoon tea is served on the Jade Terrace.

Explore Hyderabad, known as the ‘City of Pearls’ – harking back to its role in the pearl trade. Visit some of its breath-taking landmarks including one of the world’s largest mosques, Mecca Masjid and the Charminar.

Float into the paradise of Taj Lake Palace, Udaipur

The iconic sight of a white marble palace which appears to float in the middle of Lake Pichola is familiar to many of us from The Jewel in the Crown and the classic Bond movie Octopussy. Taj Lake Palace, Udaipur is one of the most romantic hotels in India and, rather like a ship in full sail, enjoys panoramic views of the shimmering water and majestic Aravalli Mountains. It was built on a man-made island in 1746 as the pleasure palace of Maharana Jagat Singh II. 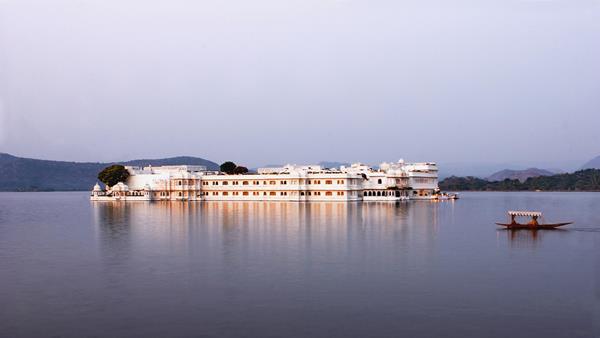 Expect a regal welcome of rose petals and refreshments after your short boat trip from Badi Pal Jetty. Your private butler will escort you one of the 83 rooms and suites are decorated with Indian textiles, four-poster beds and all enjoy views of the lake. Stay in the Chandra Prakash Suite (Lustre of the Moon) which was the first choice of the maharajah.

Start your day with a refreshing swim in the outdoor swimming pool and relax with a spa boat experience at the Jiva Spa with treatments that draw on the wellness heritage of India. Enjoy a rooftop sundowner before you dine in one of the four restaurants, specialising in Asian, Indian, Italian and Western. Choose Neel Kamal for authentic Rajasthani and other dishes or the open-air Bhairo for European delicacies or a royal experience with historic boat Gangaur.

The on-tap water taxi allows you to zip over the Udaipur, known as the ‘Venice of the East’. The best way to explore is by taking out one of the palace’s vintage cars which includes a Rolls-Royce Phantom used in the Bond movie.

Arrive to the trumpeting of royal elephant Rambagh Palace

It’s hard to believe Rambagh Palace started life as a modest garden house for Indian prince Ram Singh II back in 1835. As time passed it became a royal hunting lodge for the Maharajah of Jaipur and is now one of the most luxurious hotels in India. A royal welcome like no other awaits you when you arrive at this opulent palace which lies just south of Jaipur. As you enter through the gates expect the trumpeting of elephant to mark the beginning of your stay. 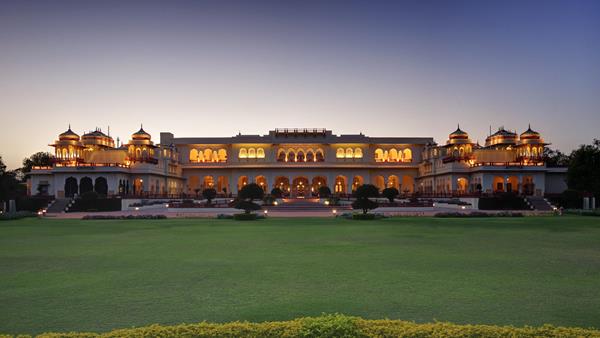 Gold-plated tableware, four-poster beds and views of the Aravali mountains and polo matches on the adjacent fields await. The sandstone balustrades, elegant cenotaphs and sprawling Mughal gardens are legacies of India’s past. Each of the 78 rooms has four-poster beds, walk-in wardrobes and luxurious bathrooms which have just been restored.

Dine in Suvarna Mahal, which offers refined Indian cuisine from four regions. Don’t miss trying the poori paratha during breakfast or high tea. Rail enthusiasts will love eating at Steam which is a restored heritage train carriage. Retreat to the heritage indoor or outdoor pool before enjoying an ancient Indian treatment at the Jiva Spa. There’s also a yoga pavilion and the perfect place for a sundowner – the Polo Bar.

Step beyond the palace gates and you’ll discover a bustling city of rickshaws and camels which lead you to a treasure-trove of wonders including the City Palace. Visit the world’s largest stone sundial at the royal observatory, Jantar Mantar along with the grandeur of Amber Fort.

The Umaid Bhawan Palace is set amidst lush, peacock filled gardens and has 94 lavish rooms decorated in Art Deco style - a stay here is a truly memorable experience

Taj Falaknuma Palace is also known as the 'mirror of the sky' because, at 2000 feet, it was built in the clouds and reflects the ever-changing moods of the sky

Taj Lake Palace was built between 1743 and 1746, and was originally a lake island palace named Jag Niwas after his highness Maharana Jagat Singh II

This historic palace, having undergone an extensive refurbishment, exudes a regal elegance - from its antique chandeliers to the peacocks on the lawn