January 10, in Our Travels

In today’s always-on, can’t-quite-keep-up world, navigating the modern holiday is a conundrum. Our curious, adventurous soul screams, ‘Go! See! Explore!’, while frazzled brains and bodies desire nothing more deeply than to slow down and recharge.

My own India travels thus far have centred around Delhi, where long-lashed cows swagger along narrow streets, their curved horns a hair’s breadth from alley walls and beeping rickshaws. Elegant women squeeze past with a swish of salwar kameezes, into impossibly small hole-in-the-wall backstreet restaurants where some of the world’s most mouth-watering thali are served. There’s so much to say, people chatter (and burst into song) through cinema screenings of the latest Bollywood films. It’s a frenetic and irrepressible jumble of a city – in my mind the best kind – but it left me exhausted and yearning to experience India’s calmer side when I returned.

And so I leave Delhi’s cacophony behind this time and head for the western Aravalli hills. India’s oldest mountain range, a nearly 700-kilometre-long, jolting cardiogram, runs from Gujarat through to the capital’s outskirts, splitting Rajasthan along the way. Given that the driving style in rickshaw-clogged Delhi is comparable to that of a frenzied ant colony, I opt for a stress-free chauffeured transfer for the five-hour journey.

At sunset I reach Ajabgarh, a village where cattle are herded along dusty paths by farmers who walk barefoot, and water buffalo chew the cud at a snail’s pace. While Rajasthan’s famed for its colour-coordinated cities – terracotta Jaipur, golden Jaisalmer, and blue-hued Jodhpur – Ajabgarh is a riot of all-natural greens and browns; russet roads line grasshopper-green fields and snake to umber forts on olive-hued hills.

Tucked behind an old stone wall is Amanbagh, an Ed Tuttle-designed haven of a hotel. In the 19th century, the area was used by Maharaja Jai Singh of Alwar as a base for lavish hunting expeditions in the dense jungles of nearby Sariska (now a national park and reserve), and in the first years of the 1600s it was used as a resting point for the armies of Mughal ruler Emperor Akbar the Great. Amanbagh’s buildings – which ring a pool where twisted date palms sway – are inspired by Mughal-era glitz. Domed roofs, scallop-edged doors, and jali latticework screens, all carved in rose-hued sandstone, give the impression that the entire property has been captured mid-blush. 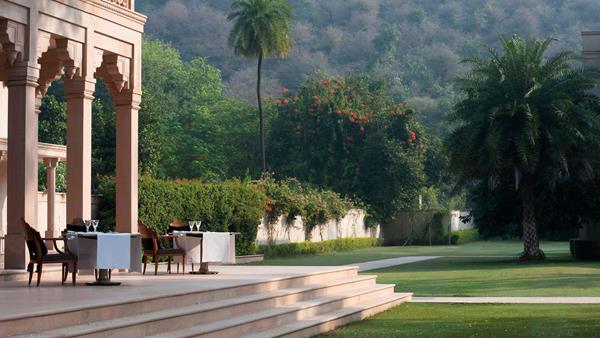 The sun rises in a slow, golden yawn, casting light across the tips of Aravalli’s undulating hills. The glowing peaks are upended as I stretch into downward dog at a yoga session among the ruins of a 17th-century chaatri close to Amanbagh. The steps which lead to the chaatri’s elevated platform are overgrown with vines, above is a dome, decorated with faded paintings of green parakeets daubed in days gone by. Finishing up in child’s pose, a real-life flock flies past, so close I can feel their wings beat.

After an alfresco lunch of paneer-stuffed parathas and roasted pumpkin and apple soup in Amanbagh’s grand courtyard, in the marble-floored spa I have an unknotting Maharani massage. The most transformative wellness experience, however, comes at dusk, during a traditional hawan or fire meditation. Eyes closed, sat in a circle around a central fire with other guests, all-in-white expert Lalit Bhushan leads us in positive mantra chants, meditation and moments of fire-feeding. The flames rear up and hiss like a spitting cobra as I drip globs of ghee into the fire. It’s hypnotising. I feel more grounded than I have in months. Next morning, cycling through Ajabgarh accompanied by guide Sita Ram, a gaggle of local kids – all wide hazel eyes and bubbling Hindi chatter – chase our bikes gleefully. Cups of steaming, sweet chai are proffered in a local family’s garden; the mother balances several hay bales Jenga-like atop her head, while her teenage daughter shyly practises her English on us between sips. 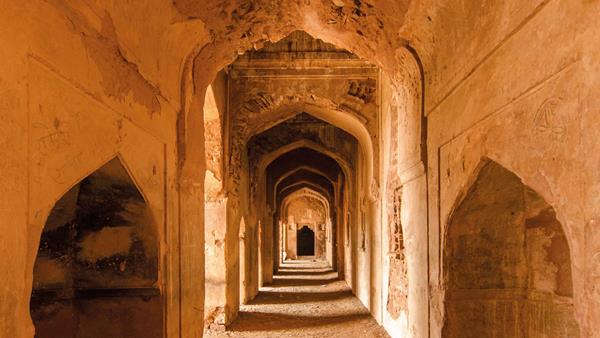 Later, we visit Bhangarh, a once-vibrant fortress town built in the 1500s. Long-abandoned, in its heyday 10,000 people lived here, and visited its vibrant bazaars and manicured gardens. Now dilapidated piles of stone mark where homes and dancers’ quarters once stood; monkeys run amok in crumbling temples among well-preserved, looming carvings of Ganesh and Hanuman; and the remains of an imposing palace stand ramshackle atop a hill.

A climb up several steep stone staircases and a clamber across broken pillars, through half-collapsed doors in the palace, takes us to Bhangarh’s highest point. The sweeping view of the skeleton town is splendid, yet sends shivers down the spine. “Bhangarh is believed to be one of India’s most haunted places,” Sita Ram tells me, solemn tone at odds with his marigold-coloured turban and jaunty moustache. “Many believe that an evil magician, Selu Sewra, cast a curse after he died while trying –unsuccessfully – to seduce Bhangarh’s princess. So potent was the curse, the place was deserted by the next day.” The more pragmatic explanation is a famine, but superstition holds strong; a sign written in Hindi script forbids anyone from visiting after darkness, and Sita Ram shudders at the thought.

Journeying in the footsteps of the maharajas, I head south, a four-hour drive taking me to Ranthambore National Park, a sprawl of dry deciduous forest between the Aravalli and Vindhya ranges, and former hunting ground turned tiger reserve. Given that the latest estimates place the worldwide tiger population at around 3,900, and that they’re solitary, notoriously elusive creatures, coming face to face with them in the wild isn’t easy. However, Ranthambore’s relatively small land (392 square kilometres) to tiger ratio (74 at last count, so my guide tells me) raises the odds of catching a glimpse. 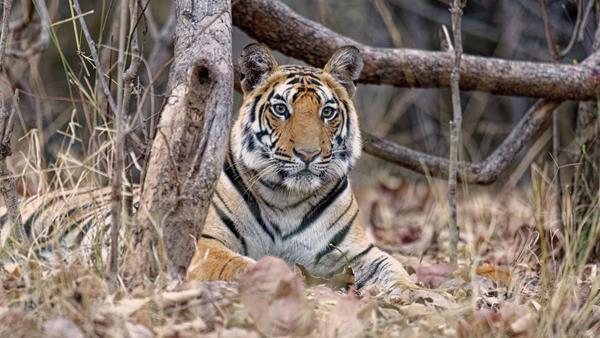 Just outside the national park is Aman-i-Khas, a next-level camping experience and base to explore. Just 10 Jean-Michel Gathy-designed tents are scattered through dense jungle where coral and blue-coloured Indian roller birds swoop through the air. Each tent is sheer explorer chic, kitted out with Indian teak furniture, tasteful leather trunks, gauzy floor-to-ceiling bedroom curtains, and a sunken bathtub. 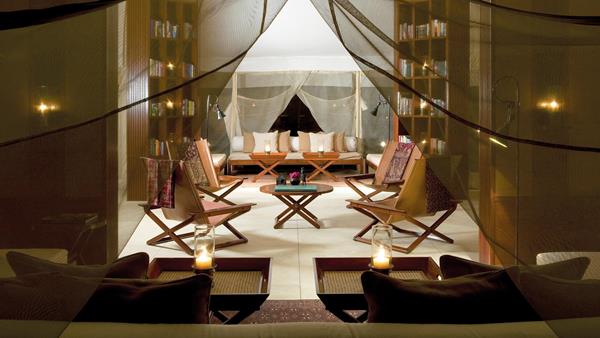 That evening, not yet even inside the park, the big cat spotting begins. At a viewpoint close by, the hotel’s eagle-eyed staff point out the tangled silhouettes of a pair of leopards mating atop a high peak as the sky turns to peach – a good omen for the following day’s safari.

At first light, bumping through Ranthambore’s leafy forest in a 4x4, khaki-clad guide Pankaj Gautam spies a crocodile submerged in a pond. “They’ll go through 5,000 teeth in a lifetime,” he reveals, as a rufous treepie, a bird with the look of a jazzed-up orange magpie, and a slender tail feather resembling a grey paintbrush dipped in ink, lands on our Jeep. Including migratory arrivals, some 350 bird species can be spotted here – from showy peacock which stalk the walls of Ranthambore Fort, to the neon bee-eater flitting through the undergrowth.

A sudden snap causes us to stop and cut the car’s engine. In the distance is a sambar deer, poised ballerina-like on its hind legs, munching on low-level dhok-tree leaves. Pankaj, however, is more interested in listening out for their distinctive, ear-splitting bark. “Hearing it is good news, it’s an alarm call, meaning tigers could be close by,” he grins.

Barks are plentiful in supply, and lead us every which way across the park’s bumpy trails, except to a tiger. It’s not until we pause by a watering hole and pull out a flask of masala chai that Pankaj spots her. Through the binoculars, a glint of amber eyes, one pair, hidden deep in the vetiver grass. Lying motionless like a sphinx is a young female Bengal tiger. Her burnished orange and black stripes – completely unique, like a fingerprint – camouflage her almost perfectly in the textured grass. Occasionally she throws her paws in the air, or bats a piece of grass around. The motion looks harmless, kitten-like and playful, but Pankaj tells me a single swipe has enough force to break human bones. It’s a wild, surprising, and somehow serene moment. 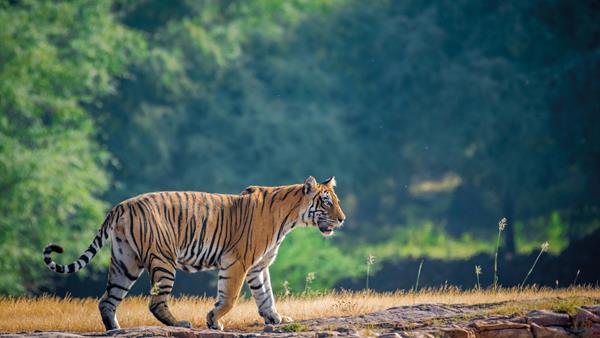 After sitting transfixed for some time, we roll back to our camp, birdwatching as we go – woolly-necked stork strut at the edge of shaded ponds, punk-like hoopoe with their impressive feathered mohawks, and noisy rose-ringed parakeet. Back at Aman-i-Khas (this time with a rosewater gin in hand) the safari continues: lizard slink through the undergrowth and greater racquet-tailed drongo whizz through the air. Following each twitch, flutter, and buzz is hypnotising, and feels like some kind of back-to-nature meditation. Every inch of the forest thrums with energy, so much so my eyes can barely keep up. Soul-stirring, yet peaceful, it feels like India at its finest.

Feeling inspired? Browse our suggested India itineraries or speak to one of our travel specialists today.