Wondering what you’ll see on your Tanzanian safari? In just 48 hours, Chris Hamlin came up close to caracal, hippo, Auger buzzard and four of the Big Five

I recently spent 48 hours in the highlands of Northern Tanzania, undoubtedly the highlight of my visit to the country. I had pretty high expectations, but I was unprepared for just how thoroughly they were going to be surpassed. We began in Karatu, close to the Ngorongoro Crater Conservation Area, then we explored the Empakaai and Olmoti Craters before finishing with Ngorongoro Crater itself, the biggest of them of them all.

I woke just after six on the first morning, the hot water bottle in my bed still pleasantly warm. I was soon up, dressed and sipping dark Tanzanian coffee while I watched the mist roll through the farmland valleys below. By late morning we’d entered the Ngorongoro Crater Conservation Area, and we found ourselves climbing a hair-raising switchback road, snaking our way up to the rim of Ngorongoro Crater, more than 2,000 metres up.

The forest quickly became dense. Fed by the constant mist, grey lichen dripped off tree branches and cushions of dark green moss sat on every log and tree trunk. Donald, our A&K guide, showed us marks gouged into the red earth of the steep banks where elephant had used their tusks to dig out and chew on nutrient-rich lumps of soil. Apparently, he told us, once they’re up the steep hill, the elephant sometimes slide back down on their rear ends!

We headed north, en route to the Empakaai Crater for our afternoon hike. Saibul, our jovial Maasai guide, joined us on the way, squeezing himself and his rifle into the back of our car and bringing with him a waft of sweet-smelling wood smoke. He wore a huge gap-toothed smile the whole time. He accepted our proffered cashew nuts but declined the offer of potato salad with a quizzical look.

The ensuing drive through the Embulbul Depression on the way to the Empakaai Crater (a relative drop of 550 metres) was astounding. We passed kilometre after kilometre of gently undulating hills studded with Maasai villages, donkeys, herds of cattle and the odd lonely wildebeest. The dusty light was hazy and washed-out, giving the entire place an ethereal look. 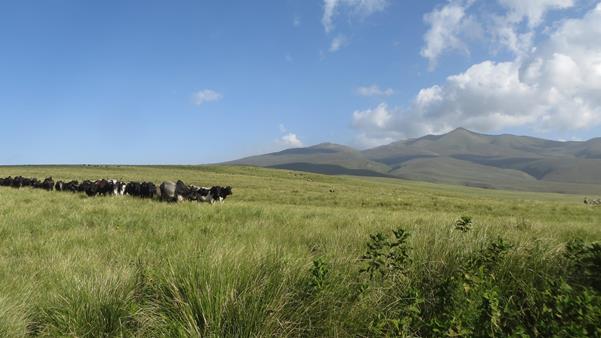 We spotted the endemic Auger buzzard which, for a birding enthusiast like me, was a big deal. Not long afterwards, we turned the corner and saw ahead of us Ol Donyo Lengai, the mountain most sacred to the local Maasai. I wasn’t expecting its neat, perfect shape nor the sparkling beauty of the lake at its centre. It was well worth the bumpy ride. 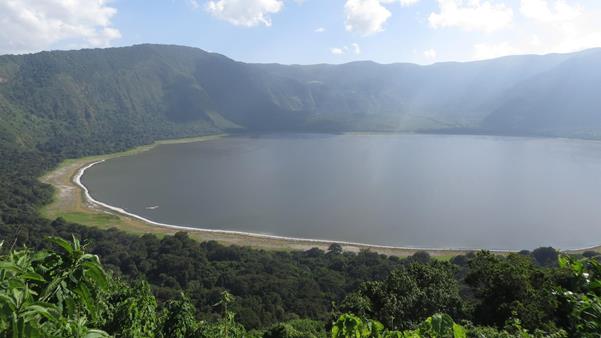 Saibul set off at marching pace down the steep and thickly forested side of the crater, the rest of us trailing behind. There was talk of descending all the way to the crater floor and the lake, but a quick look at our faces, collective fitness levels and the sun’s position convinced him that we’d be better off going half-way. After a steep descent, passing maidenhair ferns, ladybirds and, surprisingly, raspberries, we stood and took pictures of the pristine lake below. There was no sign of human life anywhere in sight.

We took up binoculars and admired the few flamingo at the lake’s edge before dragging ourselves back up to the car. Our home for the night was The Highlands, a new lodge perched on the edge of the Olmoti Crater, the highest we’d been that day. We blamed our breathlessness up the steep paths on altitude and altitude alone – which, at nearly 3,000 metres, seemed somewhat reasonable.

The canvas and glass suites have more than a hint of the Scandi-Scottish about them – tartan blankets, light flooring and roaring fires were the order of the day, accompanied by boozy hot chocolate and whiskies before bed. The glass of the suites let in the moonlight, and when I woke up in the night in search of a cool glass of water it was almost as bright as day. 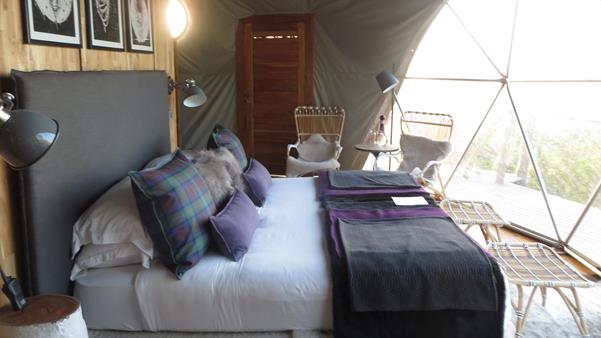 The Scandi-Scottish theme continued with the early morning temperature – I could see my own breath in the air, and I took my towel and clothes into the shower cubicle so I could get dressed while still warm. Though the day heated up quickly as we drove towards the largest unbroken volcanic caldera in the world, the Ngorongoro Crater.

As we proceeded westward, the sun came out behind us. Eventually, through breaks in the thick forest, we glimpsed the caldera rim, and then the floor of the crater itself. The sheer scale is difficult to describe. Nearly twenty kilometres across and measuring 600 metres from caldera floor to rim, this is a vast, beautiful cauldron teeming with life. 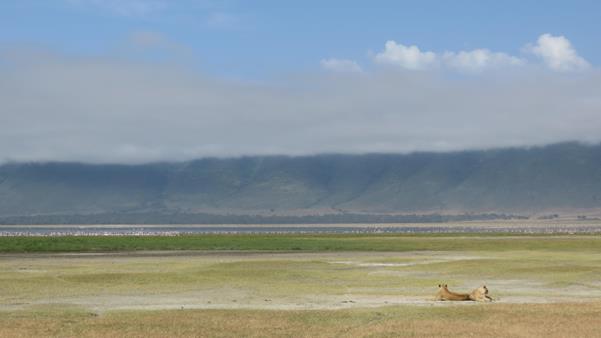 When we passed through the gate, popped the car roof and started our descent down to the crater floor, it was hard to know where to look or what to photograph first. The caldera rim with its duvet of cloud? A zebra scratching itself on a tree? The swaying grasses? A goshawk perched on an acacia tree waiting to dive? In the end, I settled on simply soaking up the experience. Down went the camera in favour of my binoculars.

The next few hours were like a dream. We saw a pack of hyena squabbling and cackling over the remains of a lion kill they’d filched, then the forlorn-looking lions themselves came back a while later, gazing into the distance at a single wildebeest who, luckily for him, was too far off to be the next meal. The lioness laid low, conserving their energy. We watched them for a while, silhouetted in the shimmering Lake Magadi directly behind them which was speckled with hundreds, possibly even thousands, of flamingo. Sometimes, a handful would take flight and alight to a different part of the lake, their black wings a sharp contrast to the rest of the blurred, soft colours around them. The towering sides of the caldera, clad in dark green forest and still topped with slowly receding cloud, made the perfect backdrop.

The crater floor was covered with a carpet of soft grasses, and here and there were bright swathes of yellow and purple wildflowers. They made a great foil for a muddy rhino who lumbered out of a ditch, sporting one of the biggest horns I’ve ever seen. Later, the bright wildflowers were also the setting for our most unexpected sighting of the day – a pair of caracal came out to hunt sparrows. We followed the progress of their sleek shapes by tracking the nodding flower heads, bending grasses and the cats’ distinctive tassel-tipped black ears. 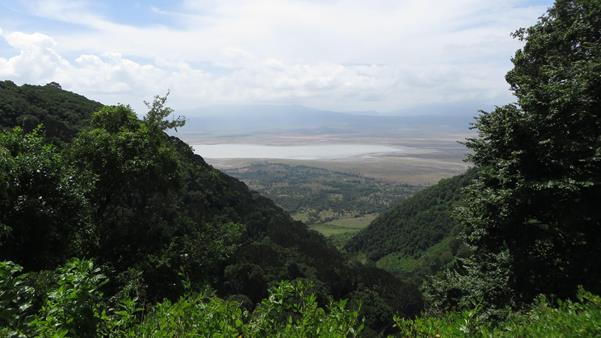 After a picnic lunch by a pool full of snorting, belligerent hippo, we started our ascent of the crater wall, stopping to gape at an enormous bull elephant whose tusks were so long he had to walk with his head tilted backwards to avoid them dragging on the ground. The giant creature ambled at a slow pace through some long grass, occasionally wrenching up a trunkful to stuff in his mouth. Little bee eaters followed his progress, darting around in the air above and behind him, snapping up the insects his thunderous progress sent whirring into the air.

We spent that night at Ngorongoro Crater Lodge, right on the crater rim, being entertained under a full moon by dancing, fire-carrying Maasai, free-flowing sparkling wine and energetic conversation as we retraced the day’s movements. I took a moment to soak in my huge bathtub, looking past my toes to the crater below – an experience like no other I’ve had.

After a deep sleep in the soft bed, I woke early enough to be on the balcony as the sun came up. The utter stillness of the scene that confronted me is very hard to convey, but picture this: the dark orange sun peeping over the eastern caldera rim, then the slow creeping of sunlight across this vast, mist-filled crater. The crater floor was dotted with the crowns of huge acacia trees, poking through the mist like heads of broccoli. When the mist started to disperse, Lake Magadi glowed mauve in the centre of the crater, and the volume of birdsong went up and up until it seemed to fill the cool air all around me. 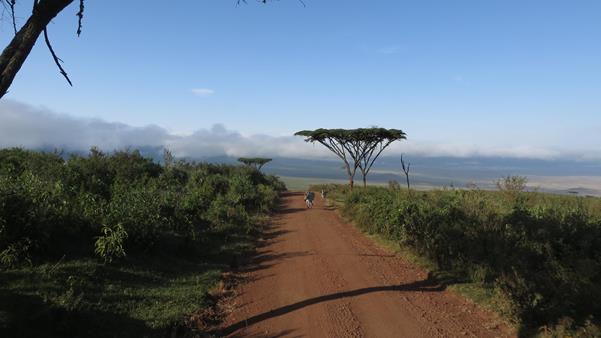 I heard the quiet but unmistakeable grunt of a lion roaring, not too far off, and I ran to get my camera – but, once again, I sacrificed the photo in favour of the experience. The longer I sat there, the brighter the colours became, and Lake Magadi was almost orange for my eventual picture. Sunbeams sliced through the mist on the crater floor, casting huge, creased shadows from the thorn trees. I took one more picture, then reluctantly dragged myself away to the vehicle. It was nearly time for the drive to our next destination – the vast Serengeti.

By the time the engine roared to life and my departure became undeniably imminent, I realised I felt that I hadn’t stayed long enough in this beautiful part of the country. I didn’t know when it would be, but I decided there and then that I’d be breathing Tanzanian air again soon.

Set high on the slopes of the Olmoti Volcano, the camp looks out over the Gol Mountains and the Empakaai Crater

Perched on the rim of the awe-inspiring Ngorongoro Crater at the eastern boundary of the Serengeti, this is one of the most architecturally spectacular safari lodges in Africa