Son of a crocodile hunter-turned animal conservationist, Ralph Bousfield is a safari rock star and one of a kind, says Alicia Williams

Ralph Bousfield impresses even in two dimensions. A quick Google image search returns pictures of him striding across the Kalahari, driving a quad bike on the dunes, climbing into the pilot’s seat of fixed-wing aircraft, and sitting like a statue while meerkats use him as a lookout post. In some pictures, he sports flowing 1980s rock star-esque locks, in some his hair is cropped short and business-like, but in all of them, he’s the epitome of a safari superstar – all khaki bush jackets, dark fedoras, lace-up brogues, and his signature bracelets. One wrist is laden with them: cuffs of copper, twists of leather, and circlets of beads. 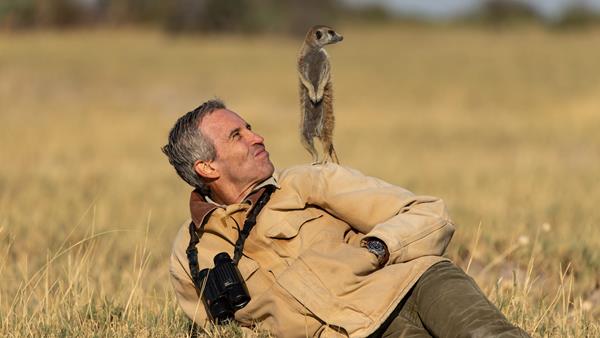 It’s these images that I have in mind when I speak to Ralph over the phone, from one of his offices in Cape Town, and the effect is striking. The impression he gives is one of charisma, intelligence, and vast reserves of knowledge. What it must be like to have him as your guide in Africa, I can scarcely imagine, but I know it’s an experience that is going straight to the top of my bucket list.

Born in Tanzania and raised in the Kalahari by a bona fide African legend – Jack Bousfield – Ralph is one of Africa’s most renowned guides: the singular choice for those who want to explore the intriguing deserts of Botswana and Namibia, and to experience the assailed-by-modernity traditions of the Zu’/hoasi (also referred to as San) bushpeople, among whom Ralph was brought up by his crocodile hunter-turned animal conservationist father.

His elite client list includes Oscar-winning actresses, film-makers, and former US presidents. He’s shepherded them through Africa – from Angola to Zambia, and most places in between – and he’s not the first in his family to have guided a person of privilege. In fact, all recent generations have engaged in some form of the occupation – family legend has it that in the late 19th century after the Anglo-Zulu war, his maternal great-grandfather, Major Richard Granville Nicholson, escorted Princess Eugenie to the site where her only son had been killed.

But it was a more recent tragedy that radically affected the now 57-year-old’s life. In January 1992, father and son’s small fixed-wing aeroplane crashed in Botswana’s Okavango Delta. It was Jack’s seventh and final crash. As a memorial to his beloved parent, Ralph established 10-bedroom Jack’s Camp in the Kalahari, seven-bedroom San Camp on the edge of the Nwetwe Pan, and Camp Kalahari (the “laidback little sister of Jack’s and San Camp”). 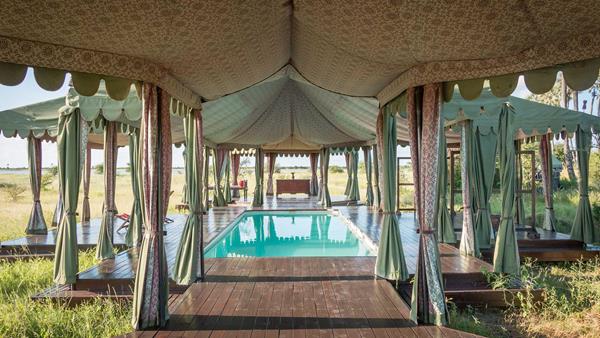 By those who knew him, Jack’s spirit can be felt at these desert camps. In the early 1960s, when Ralph was only weeks old, Jack – perturbed by the socio-political changes occurring in Africa – moved his family from Tanzania to a seemingly empty space on Africa’s map. It’s often recounted that when Jack asked what lay in the Makgadikgadi Pan, he was told “nothing – only idiots go there”. “Fine,” he’s said to have replied, “that’s the place for me.” It was the place for his whole family – and all five of his children revelled in life among the pristine salt pan landscape and community of San people. Jack’s Camp is located in the exact spot that Jack first pitched up, in an area he described as embodying the “savage beauty of a forgotten Africa”.

Jack’s Camp is known to all Africa aficionados for its 1940s-esque glamour and oasis-like comforts. This year, it will reopen following a revitalisation. It will boast a refreshed look, but its appeal won’t have changed – and nor will the camp’s official museum accreditation. In the mess tent and library, on display in cabinets, are enthralling artefacts, curios, and tchotchke collected by the Bousfield family over the generations. 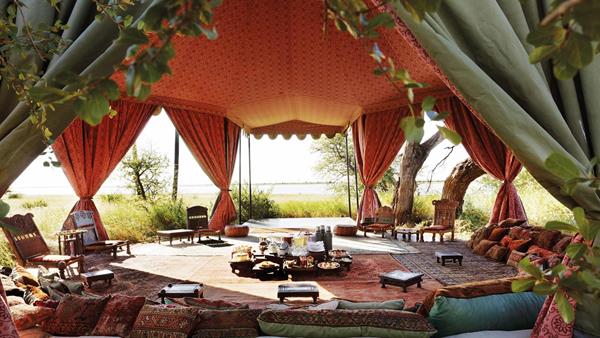 Ralph’s pioneering family first arrived on the continent in the 1670s, a mere two decades after the first ‘European city’, Cape Town, was founded by the Dutch East India Company. Scion of this line of adventurers, explorers and, yes, hunters, his father Jack is famous – or as viewed through a prism of more modern sensibilities, notorious – for a Guinness World Record for the number of crocodiles shot. He supplied famous European fashion houses with the raw materials needed for crocodile skin bags, belts, and shoes. Times and tastes have changed, and Ralph is proud that his father was one of the first ‘great white hunters’ to see the change coming and turn his back on his profession.

Living a Boys’ Own adventure in the desert at his “exceptional” father’s side, capturing animals for zoos or to restock areas in which those animals had disappeared, Ralph experienced the “full beam” of his father’s attention. “Dad had a different attitude to education than Mum’s. He believed I could learn more from him and from immersion in the bushmen’s traditions.” Before going to boarding school at age 10 – and during every holiday thereafter – he learnt the types of skills, such as tracking, that make other men envious (even the little ones). Telling my six-year-old son about Ralph and his life, his eyes grew round with amazement and he instantly wanted to know if “his daddy taught him how to wrestle a crocodile”. “He did,” Ralph chuckles when I relay the question. 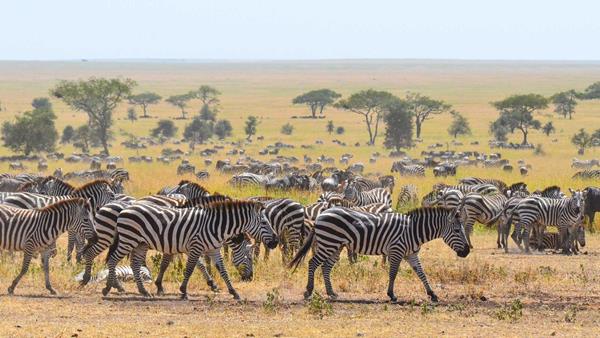 He recounts the time he was asked to catch a crocodile wreaking havoc near a village. “It turned out to be a LOT bigger than I had been told – 12 feet long – but I had committed to capturing it, so just had to jump on this leviathan’s back.” Levi, as the crocodile was quickly nicknamed, was moved to the wildlife orphanage that Bousfield helped to establish. “He’s still there – 14 feet long, as broad as a bus, and quite the character.”

Though passionate about animals and a trained biologist, Ralph is undoubtedly also a people person. He announced to his siblings at age three that he would be taking over the then-seasonal family business of showing tourists the wonders of Botswana’s deserts. “I think it was a relief for them. There have been times I’ve been overseas, but the Kalahari is my soul’s spot,” Ralph says. One of those stints abroad was postgraduate research in natural conservation at the International Crane Foundation in Wisconsin, studying under conservation legend George Archibald. “It’s very cold in Wisconsin, especially when coming from a hot summer in the Kalahari – but it was a fantastic experience.”

And then there is Ralph’s involvement in various philanthropic projects. His three camps support the Makgadikgadi-Nxai Pans Conservation Initiative, which is working to create the optimal conditions for Africa’s best-kept secret: the Makgadikgadi-Nxai Pans zebra migration. Every year, 25,000 zebra cross the Chobe River and move due south to the Nxai Pan National Park before returning, less directly, to their dry season habitat, but Ralph remembers hundreds of thousands, millions of these animals on the move in the 1960s and 1970s. All great animal migrations are under threat from anthropogenic pressures and land-use transformations, and Ralph wants to see the numbers of zebra undertaking this annual trek return to those he saw in his childhood. He believes it can benefit more than just the animals. “It’s really quite hard for Botswanans to find work,” he says, “and one often needs an economic driver for animal conservation projects to be successful. Imagine what it could do for tourism in Botswana if the Kalahari’s migration was equivalent to the Serengeti’s.” 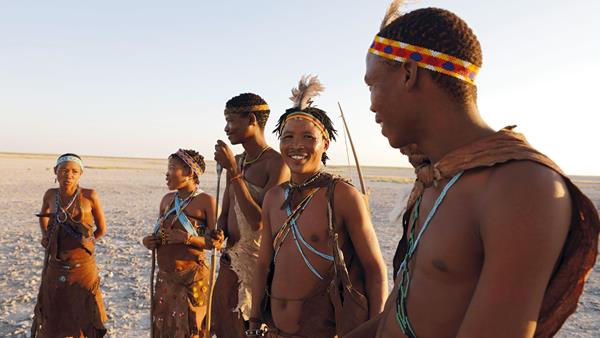 For the Kalahari bushmen, tourism is a much-needed source of income. Travellers who venture to this remote corner of Botswana value this endangered culture – their language, ability to track, their songs, dances, and trances. The San people have lived in the Kalahari – Earth’s fifth largest desert – for at least 35,000 years, maybe as long as 75,000. It was from this area that our human ancestors may have emerged. Talk about travellers going back to their roots. Ralph, who has known these people for practically all of his life, is an advocate and facilitator of these meetings.

The next generation of the Bousfields is also growing up among the Zu’/hoasi. Ralph and partner Caroline Hickman’s seven-year-old son Jack has just begun to learn to track. “In traditional culture the onus is on the individual to want to do something. Stepping forward when you feel the calling. He came forward recently and said, ‘I’m ready. I want to.’ So off he went in his flip-flops and shorts with a legendary tracker called Cobra. The extraordinary thing is that I was learning the same thing at around the same age from the same man.”

Fitting in all the demands on his time – father, guide, hotelier, businessman, biologist – must require a good deal of multi-tasking, so how does he find the energy and passion to keep it all going? “I want people to come to the Kalahari, meet the San people and enter a new dimension with the knowledge that we are more similar than different, that we are all wonderfully the same. It’s extraordinary and so profound.”

Feeling inspired? Browse our suggested safari holiday itineraries or speak to one of our Africa specialists today.