November 2, in Our Travels

Beijing is a must-see stop on every first-time trip to China. From the vast stretches of the Great Wall to the ancient steps of the Forbidden City, there are countless reasons to explore the country’s capital.

It’s easy to follow well-trodden tourist trails here, but on my recent visit, I wanted to discover a different side of Beijing – to see the old sights from new angles, and some new sights, too. Here are a few of my highlights. 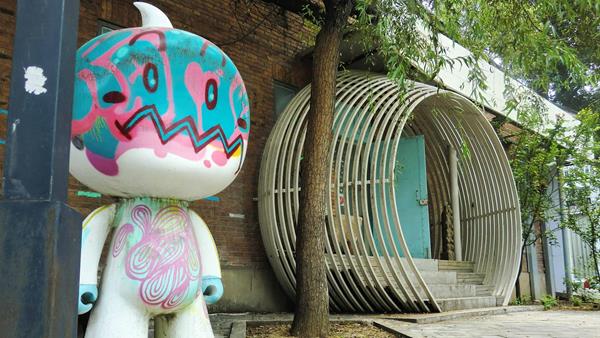 The city of Beijing has a recorded history stretching back over 3,000 years, but – like the rest of modern China – it’s now a dichotomy of old and new. Looming skyscrapers cast shadows on thousand-year-old pagodas and the city’s fleets of bicycles are joined by hyper-modern electric cars. It isn’t too unusual, then, that alongside the classic sights of the Great Wall and the Summer Palace, Beijing has a lively subculture of art and fashion.

In a twist of irony, the 798 – one of Beijing’s most proliferous art zones – is situated in a series of decommissioned military factories established during post-war cooperation with the Soviet Union. Today it houses art galleries, coffee shops and boutiques, in addition to hosting the Beijing Queer Film Festival and the Beijing Design Week. Here, busking artists are passed by glamourous members of the city’s social elite, dressed in the latest in high fashion and escorted to and from the area in supercars.

We arrived in the late afternoon, the summer heat slowly lifting as we floated between galleries and art installations. My guide informed me that the number of free galleries in the area is declining, as pressure for land builds in Beijing, and you can certainly feel a sense of borrowed time wandering around the streets.

Just as Soho in New York went from chic to passé, the 798’s days in the limelight are numbered, so I recommend exploring this curious little snapshot of Beijing’s subculture while you can. 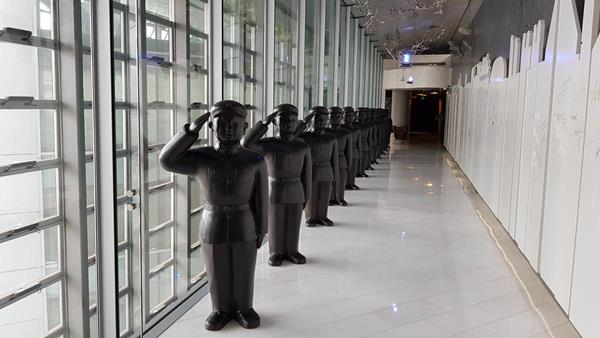 It’s rare to fall in love with a hotel, especially at first sight, but when we pulled up to the Parkview Green building, I knew I was in for something special. Situated on the trendy Dongdaqiao Lu thoroughfare, the Parkview Green is a sustainably built shopping-complex-cum-gallery devised by Chinese real estate mogul George Wong. The entire property is an art installation by design, and filled with the best of China’s art scene, as well as Asia’s largest Warhol and Dalí collection.

The lobby of the Eclát tucks so neatly behind the entrance to the Parkview Green that I nearly missed it. The hotel is split between five floors, each with a unique theme and atmosphere, and there’s a sense of Through-the-Looking-Glass wonderment as you enter. An eclectic arrangement of art pieces surrounds George’s Bar, where guests can wine and dine, and the miniature chaise longues in the lifts hint at the eccentricity awaiting you in the floors above.

Unsurprisingly, the Eclát has attracted international attention, and the wall of fame on the fifth floor bears the signatures of many of its most distinguished guests. Bloombergs and international diplomats aren’t hard to spot, and the personification of the hotel – Lady Gaga – left her spiralled signature here too. 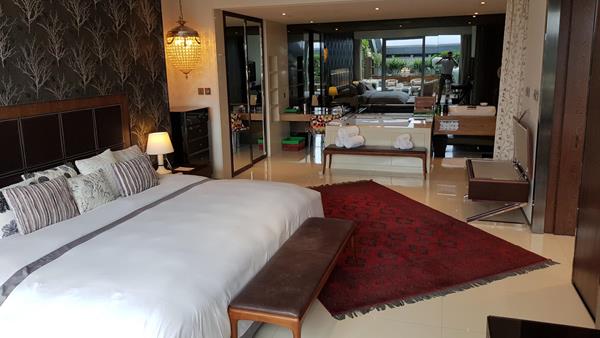 Whilst surely not a hotel to everyone’s taste, I couldn’t recommend the Eclát more. Many artistic hotel projects feel kitsch or contrived, but the Eclát feels very authentic, and a magical retreat from bustling Beijing.

Jinshanling: Solitude on the Great Wall 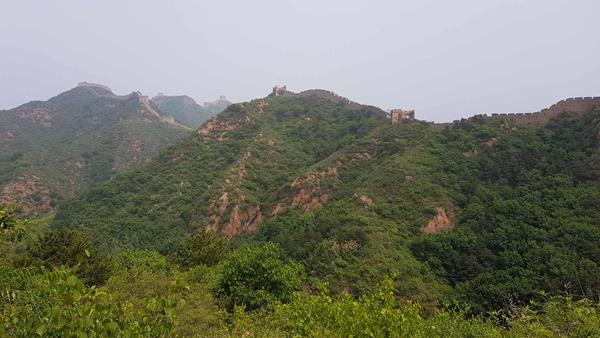 The Great Wall (or, as my guide more accurately pointed out, Great Walls) of China is an ancient defence system originally designed by Qin Shi Huang, China’s first real Emperor, to defend against raiders from the Eurasian Steppe. With China’s economy booming and a vast middle class developing, today you will find the most popular sections of the wall drowning in tourists, making that perfect snap of the ancient stones impossible to capture.

The most popular sections, like Badaling, have a history with Chinese officials, including Chairman Mao, and are conveniently close to Beijing. They are also now almost entirely restored, having been plundered for centuries for building materials. The more remote sections like Mutianyu have fared better, but I dared to venture a little further off piste to find a section where I could properly experience the awe-inspiring nature of such an ancient structure: to Jinshanling.

We headed out on a Saturday morning, which my guide had said wasn’t wise; not only are weekends far busier than weekdays at these sites, but the next Monday was a national holiday, and scores of Beijing residents would be leaving the city to resorts nearby. Typically, the journey takes two-and-a-half hours, but on this occasion my guide’s finger was on the pulse, and five-and-a-half hours later we arrived.

You can choose a 30-minute hike up the winding mountain footpath to reach this more remote section of the Great Wall, or opt for the convenience of a cable car ride – as we did. Stiflingly warm in the thick June air, our little hotbox crept quietly up the mountains, giving us brief glimpses at the wall from behind the trees. What we found when we arrived blew me away: miles and miles of battlements divided by towers, continuing off into the misty horizon. Despite the beauty of Jinshanling and the timing of our visit, I could count the tourists nearby on one hand. If you are looking for originality and a bit of peace on the Great Wall, I couldn’t recommend it more (but consider avoiding the weekend traffic).

If you’re feeling inspired, take a look at our suggested China itineraries, or speak to one of our travel specialists to begin planning your tailor-made holiday.

The Discover China itinerary includes visits to the Forbidden City, Temple of Heaven, Tiananmen Square, the Summer Palace and the army of Terracotta Warriors

Explore Beijing’s wow-factor architecture and cutting-edge landmarks. From futuristic skylines to bygone neighbourhoods, immerse yourself in the capital’s old and innovative

Read More
Chosen by our travel specialists to surpass your highest expectations, A&K Favourites are a collection of luxurious hotels which offer our clients a little something extra on check-in.

A landmark building in Beijing, The Peninsula exudes an atmosphere of luxury living - exemplified by the highest standards of service and flawless attention to detail

New World Beijing Hotel is centrally located in one of Beijing's fastest growing commercial districts and situated close to the cultural attractions of The Temple of Heaven, Forbidden City and Tiananmen Square

The Aman at Summer Palace

Just steps from the East Gate of the Summer Palace grounds lies Aman at Summer Palace. It is the ideal location from which to discover Beijing, providing easy access to landmarks such as the Great Wall, The Temple of Heaven and the hutongs

A member of the exclusive Small Luxury Hotels of the World, 5-star boutique Hotel Éclat Beijing is a striking landmark on the Beijing skyline, standing impressively in the heart of the city’s downtown Central Business District