Travelogue: Horse-swimming in the Iberá Wetlands

January 1, in Our Travels

Travel writer John Bell goes horse-swimming in the Iberá Wetlands – an unforgettable way to experience the gaucho trail during an A&K holiday to Argentina.

Horse swimming is the climax of a recently launched gaucho experience across northeast Argentina’s vast Esteros del Iberá. It’s some backdrop for an adventure. It's the second biggest wetlands on Earth – a tangle of channels, lakes, pool and marshes covering an area of Corrientes Province equal to the size of Belgium. 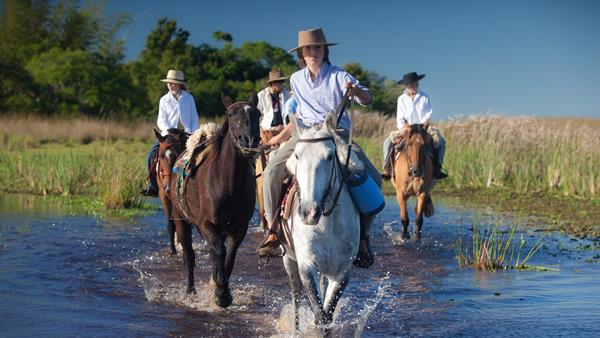 Funded by the Conservation Land Trust (CLT) – a dynamic NGO founded by Doug Tompkins, the late conservation philanthropist who made his fortune with the North Face and Esprit empires – the trip harnesses the knowledge and skills of local Guarani gauchos from three different paraje (hamlets). They unveil their remote world with horseback rides, canoe trips and plunges in the crystal-clear water. 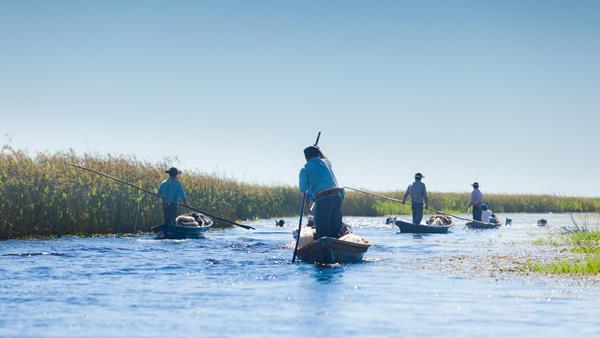 Horses and guests swim while gauchos trail in traditional canoes

It’s pioneering stuff. While ecotourism is well established in Iberá’s east, it’s still in its infancy in the west, where the trip is part of a drive to provide an alternative income to hunting alongside a new appreciation of the wetlands and its wildlife. This is a rare opportunity to be an early visitor to a spectacular and untarnished world.

After a night in one of Concepción’s three rustic-chic boutique hotels, we drive along dirt roads to El Transito. This estancia (private estate) was bought by CLT as a protective buffer for the wetlands and new entry point to the lush interior. In the weather-hardened hands of Carlito Leiva from Yahaveré – a paraje on one of Iberá’s forested islands – we set off under a sweeping cyan sky. It’s instant immersion in a natural wonderland. Ostrich-like giant rhea, sheep-sized capybara and sharp-snouted caiman all live here.

And then there are the birds. Incredible birds. The wetlands are home to 350 species. Within a short time, we’ve spotted the great kiskadee’s bright yellow chest and black eye band, ringed kingfisher’s gorgeous blue head and savannah hawk’s copper plumage. This is twitcher heaven.

Although there’s a fair amount of saddle time, you needn’t be an experienced rider. Carlito assesses my standard – lamentable – and matches me with the calm, sure-footed Alazana. After a couple of hours at a stately passo pace, we’re passed to Carlito’s brother, Rodolfo, for a serene canoe ride. Using a long bamboo pole, he glides us within breath-taking proximity of a two-metre caiman and above pancake flat raya fish with their serrated tails and upturned noses. 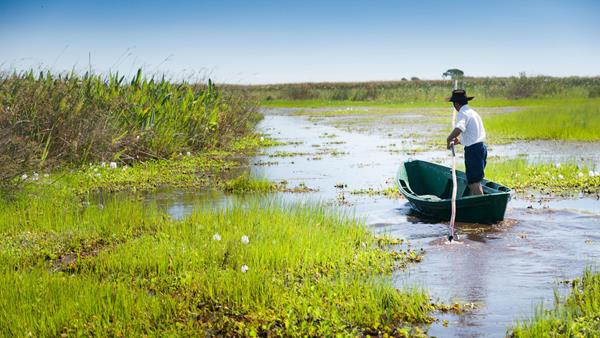 The operation appears seamless. A picnic lunch and we’re ready for new horses courtesy of Omar Rojas from the second paraje of Ńu Puy. Our target is a thatched mud-floored straw shelter for a night on a traditional camp bed. Forget high-thread count Egyptian linen – this is the luxury of authenticity. As we watch a molten gold sunset, Omar unsheathes his foot-long blade. “Around here,” he growls, “a man without a machete is like a policeman without a gun.”

It’s high-octane fuel. We have another two-hour ride and three-kilometre canoe trip to reach the island for swimming. This is the traditional method of moving cattle off the wetlands. Here I’m passed to Chopé, a gaucho from the third and final paraje of Carambola. As I swim alongside my new horse next to Jorge Mazzochi, the wetland naturalist and trip coordinator, Chopé canoes behind: a timeless Iberán scene.

With thick reeds to one side, snorting, rasping filly to the other – swimming horses are anything but quiet. I glance underwater to watch the cycling motion of her powerful legs. It’s mesmerising. A kilometre and 20 minutes later we reach shallower water where my mount stands and I pull myself onto her back. One of the strangest, most exhilarating dips of my life is over. 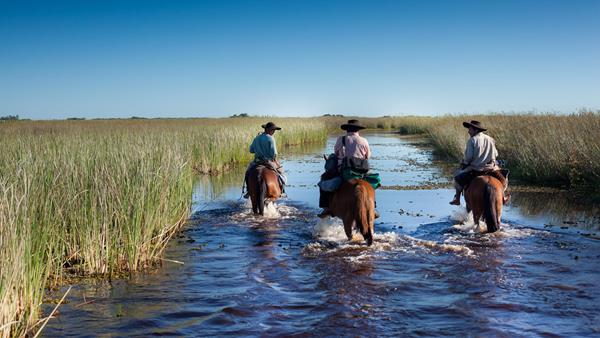 These gauchos are the real deal

On our final evening, Jorge somehow conjures up a gourmet meal on a small wood fire inside an oil drum. It’s fabulous fun but things are about to get a lot more luxurious. On the other side of the wetlands I spend two nights in the CLT’s Rincón del Socorro. The gloriously restored, late-19th century estancia sits on the conservation frontline. Its cattle removed, its land transformed into a nearly 30,000-hectacre reserve – home to the largest rewilding programme in the Americas. In the hands of expert guides, I watch pampas deer and tapir in the lengthy process of being reintroduced into Iberá’s wilderness.