Best time to visit the Galápagos

When to go to the Galápagos

Visiting the Galápagos in January 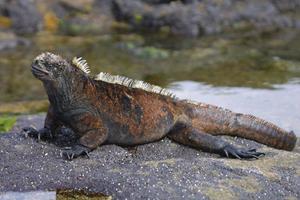 Visit Española Island to see land birds building their nests and marine iguana displaying their bright colours. You'll also be in with a chance of seeing sea turtle laying their eggs on shore.

January is the beginning of the rainy season in the Galápagos, with both water and air temperatures rising and staying warm until June. This is an ideal time for snorkelling.

Visiting the Galápagos in February

Water temperatures can reach 25C, with these conditions likely until April.

Visiting the Galápagos in March

Fernandina, Española Island and Isabela Island are the places to see marine iguana nesting and the arrival of waved albatross. Strap on a snorkel to see penguin performing impressive underwater acrobatics.

The rainfall is at its highest in March, with sporadic downpours taking place. Humidity is high and air temperatures begin to reach 30C.

Visiting the Galápagos in April and May 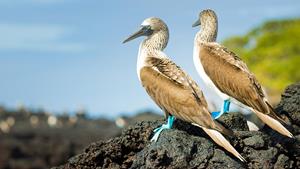 In April, the islands of Isabela and Española are the only places in the world to see waved albatross performing their courtship rituals. This is also the time to see giant tortoise and land iguana hatching.

In May, blue-footed boobies display their courtship rituals while sea turtle and marine iguana hatch from their eggs.

Visiting the Galápagos in June and July

Frigate birds display their red pouches, and on North Seymour Island southern migration birds land to rest on their journey over the Pacific. On Santa Cruz Island, giant tortoise migrate from the highlands to the lowlands in search of suitable nesting places.

In July, sea bird communities become very active and lava lizard begin their mating season. Whale and dolphin species are most likely to be observed at this time, especially off the west coast of Isabela Island.

Visiting the Galápagos in August 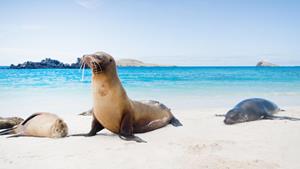 August is pupping season for the islands' sea lion population, and it's also when giant tortoise return to the highlands. Nazca (masked) boobies and swallow-tailed gulls begin nesting, and Galápagos hawks start their courtship rituals.

Ocean temperatures drop to around 18C, with choppy waves and strong currents likely off exposed shoreline.

Visiting the Galápagos in September

Head to the islands of Mosquera, Española and Bartolomé to see colonies of chattering sea birds at their nesting sites. Sea lion become very active, with frequent fighting between males for mating rights. Dive beneath the waves to see torpedo-like Galápagos penguin hunting for small fish.

September is the peak of the cold season, with air temperatures dropping to 19C.

Visiting the Galápagos in October

On Española and Isabela, lava heron begin nesting and blue-footed boobies raise their recently hatched chicks. This is mating season for fur sea lion, and you'll also be in with a chance of seeing giant tortoise laying eggs.

The cold season continues, with some low-lying fog possible. However, this tends to burn off throughout the morning.

Visiting the Galápagos in November and December

In December, giant tortoise eggs begin to hatch and green sea turtle put on their mating displays. The weather improves significantly in these months, with calm seas and excellent visibility for snorkellers.

The Inca Empire & The Enchanted Islands

Led by your very own Peru guide, this trip covers a lot of incredible ground

From family fun to in-depth observation, search for the unique species, which inhabit the Galápagos Islands. Uncover their habitats on boating excursions, guided hikes, and other exciting activities

From the cobbled streets of Quito to the extraordinary Galapagos Islands, spectacular treasures await on this Ecuador tour

From family fun to in-depth observation, search for the unique species, which inhabit the Galápagos Islands. Uncover their habitats on boating excursions, guided hikes, and other exciting activities

Explore the Galápagos Islands in style. Step aboard the Stella Maris, a luxury yacht chartered exclusively for this adventure

Discover the majesty of the Galápagos Islands in ultimate luxury. Enjoy exquisite cuisine, incredible scenery and dedicated hospitality as you cruise this tropical paradise

The Petrel offers a unique way to experience the Galapagos on a selection of eight, five and four day itineraries taking in the main sites of the Galapagos Islands

Discover the unique islands on board the Galapagos Legend, a boutique expedition ship, accommodating up to 100 passengers

The Integrity is customised to accommodate 16 guests in comfort, safety and style thanks to the state of the art stabilizers enabling you to enjoy a smooth cruise through the beautiful Galapagos Islands

The yacht was even named after the memory of Lonesome George, the last of the Pinta Island tortoises

The Origin operates two eight-day itineraries to discover the magical Galapagos Islands, with two expert naturalist guides an experienced crew all being looked after by the Captain

Step aboard a yacht that will take you to the heart of the Galápagos, while honouring the approach of the islands’ most famous visitor, Charles Darwin

The nine luxury tents are located below the main lodge. Erected on wooden platforms, they are composed of three layers: one to protect against the sun, another against the rain and an inner canvas shell

Hidden in a secluded location and nestled on top of an extinct volcano crater, Pikaia Lodge is a stunning new alternative for exploring the ‘last paradise on Earth’

Located on Santa Cruz Island, at the heart of the Galapagos archipelago, this iconic hotel enjoys prime position on the water’s edge