July 1, in Our Travels

Egyptian tourism is rising from the ashes, but visit soon and you can still experience uncrowded tombs and no queues at the pyramids, as Nick Redman discovers.

We’ve met before, this superstar and I: that gaze framed by eyeliner worthy of Elizabeth Taylor; the 24-carat complexion as clear as Naomi Campbell’s. Last time I came to Cairo I queued with hundreds, shuffling along in hope of an audience. Now it’s me and Tutankhamun, more or less alone. 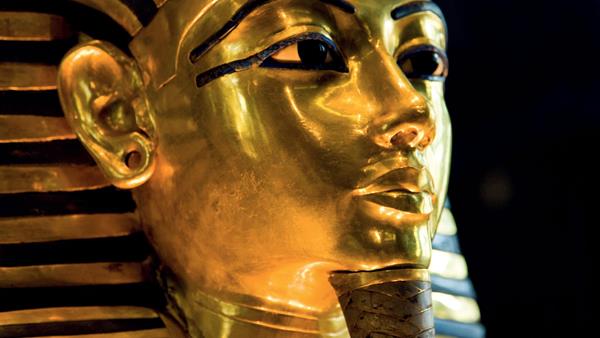 For decades, among the countless exhibits in the Egyptian Museum, one has held centre stage: the solid-gold death mask of the world’s most famous pharaoh, forever swarmed by sightseers desperate to lock eyes with a legend. In 2007, I remember, I was forced to admire from afar, above a sea of bobbing heads. Today I’m enjoying more or less a private viewing.

There are small whirlpools of passers-by – from Taiwan and Brazil, France and Greece. I chat with an amiable lady from Chennai, who has flown via Mumbai with a party of 20 for a week’s holiday. The museum, we agree, doesn’t feel empty, just non-touristy and hassle-free – altogether rather rarefied, despite the savage grimaces of wizened brown mummies, like so many extras from Michael Jackson’s Thriller video. There’s space to think, to read, to contemplate the myriad artefacts which these mysterious forebears left for us to decode – desiccated fragments of meat, bread and dates; wigs and shrines. All so exotic, yet simultaneously everyday – Egypt’s eternal appeal.

On a balmy blue October afternoon – temperature 25 degrees Celsius – Cairo has a calm, contented air as I exit the museum. In the grounds, idling under trees, clusters of armed security guards – such as you’ll see nowadays at the Louvre or London Bridge Station – are a discreet reminder that Egypt has navigated some violent political rapids since my previous trip; as, indeed, has the world. Desperate times followed the national uprising
in January 2011. Now, for the locals, there is light at the end of the tunnel: tourism, Egypt’s economic lifeblood, is flickering back to life.

We aren’t talking anywhere near the 15 million visitors averaged annually before the revolution. Yet in 2016, British numbers totalled 231,000 – reportedly a rise of 30 per cent year on year. At gov.uk, the Foreign & Commonwealth Office’s safety map is coloured green (for go) all along the broad belt of the Nile, through Cairo and north to the Mediterranean: prime sightseeing territory. The Egyptian pound is twice as cheap since the currency was floated just over a year ago. If you’ve long had Egypt on your bucket list, the time to tick it off is now.

And so I step aboard Sanctuary Sun Boat III in Aswan, after a 90-minute flight south from Cairo, spent transfixed by the tawny wind-sculpted wastes of the Western Desert, 11,500 metres below. Home for the next three nights is a vessel of svelte elegance, with its own private mooring (beyond the clusters of cruisers closer to town, many sadly empty, awaiting bookings). Interiors synthesise Bedouin tradition (bright cushions, long sofa-stools) with shiny ewers and other Cairo-auction finds. In the airy Howard Carter Lounge, where G&Ts slip down with ease, a wind-up gramophone with trumpet speaker has a colonial whiff of Agatha Christie. 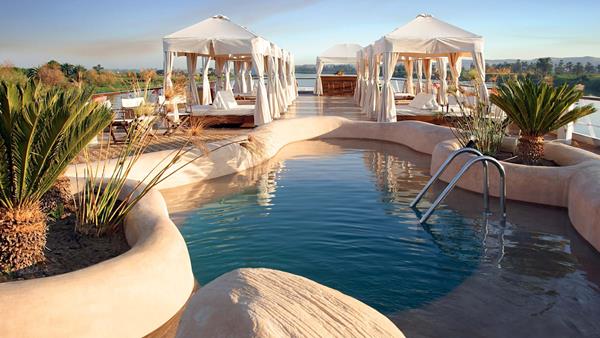 With 16 supremely comfy cabins (from regular, with power shower, to royal, with bathtub and balcony), Sun Boat III is in fact a mobile boutique hotel, ready to spirit us over the next couple of days to Luxor, 200 kilometres north, past fertile plains, lively towns dotted with mosques, and of course some of the greatest temples on Earth.

So close to Sudan, Aswan is another country, home to the atmospheric Temple of Isis, god of the underworld. Remarkable mostly for its powers of survival, the temple preached paganism for millennia, from its BC founding until the 4th century, well after the arrival of Christianity. In the 1970s it was even moved stone by stone to save it from the drowning waters of the first Aswan Dam. Following our guide, George, a fascinating young Coptic (Egyptian Christian) man, we wander in awe, silent save for our footfalls.

The people of Aswan are dark-toned and noble, their souks an irresistible netherworld of tobacco-tinted smiles and spices in piles, pairs of socks at £1 a pop and displays of unctuous patisseries. Heavy with purchases, we reboard to sail the Nile to Kom Ombo, a stretch spent relaxing in the cool of the top-deck cabanas. All the while a staff member circulates with tankards of cold Egyptian Stella to soften the Greek-island heat of the day.

That afternoon our stomachs are full (with barbecued chicken from a particularly fine aft-deck lunch) – as full as the Temple of Kom Ombo is empty. Unnerving? Quite the opposite: we are growing accustomed to this sense of privilege; our own private Egypt. Even so, a low-lit bunch of dried-out crocodiles behind glass manage to give us the heebie-jeebies, leering eerily as if still alive rather than long-dead, mummified in antiquity for Kom Ombo’s deity, the reptilian god Sobek.

Casually weaving all this awesome history together is the mysterious Nile, every bit as intriguing itself. Gazing while lazing in the cooling plunge pool on deck, I am mesmerised by the eternal shape-shifting of the banks and landscapes. One minute they are flat, green and frilly with date palms, grazed by cattle the colour of fudge; then, around the next sweep they reappear as towering cliffs of deathly pallor. After dark, as other guests dress for dinner down below, I sit at the prow in a folding chair, tickled by Mediterranean-warm breezes, and watch the captain’s torch sweep the shore, detecting sandbanks, looking for the way ahead in the absence of maps (the river is uncharted). When it goes off, blackness descends, leaving me under a sky powdered white with stars.

Magically the voyage finds its perfect balance, both informative and indolent, given to elegant dinners of lively discussion, invariably about the delicious food. One evening there is succulent Nile perch, caught by an enterprising guest earlier that day and baked whole. The mere mention of omm ali – a sweet, filo-layered pudding laden with cream and nuts – soon has tongues dangling like Pavlov’s dogs’.

The winning main course is Luxor, where our voyage ends. While not edible, it is incredible, creaking under the weight of its sights. I will always remember the town’s eponymous temple, its enormous façade effigies like an opera set. And I will never forget ambling around the vast decaying complex of Karnak in the day’s fading light. Begun in 2,000BC, Egypt’s largest temple pays homage to Amun Ra, the supreme god. But never mind the history, feel the width – or rather the height. In the Hypostyle Hall, endless soaring columns topped by billowing capitals evoke a long-lost episode of Star Trek. 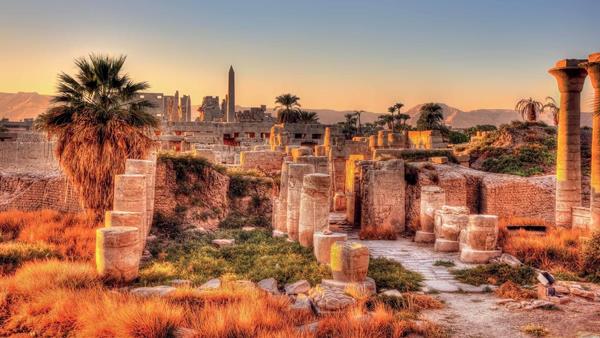 Ultimately – inevitably – we are drawn to Luxor’s western bank; the sunset side of the Nile, reserved for the burial of the dead since dim distant centuries. The infamous Temple of Hatshepsut stretches like a corpse’s grin, cut into the quarry-like rocks in a procession of toothy columns. But the greatest bounties are more subtle, hidden far below ground in the Valley of the Kings. 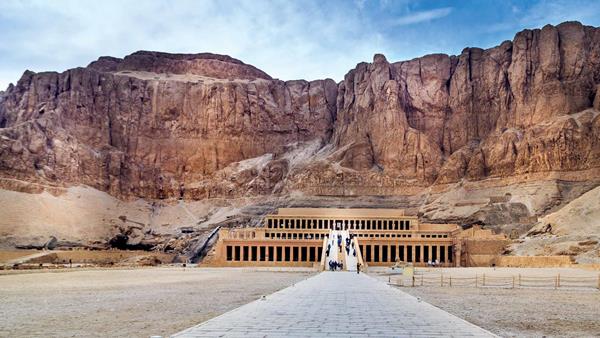 Here, down a set of unassuming steps, I’m thrilled to once again come face to face with my favourite pharaoh, Tutankhamun: the man, or rather the mummy, behind the golden mask. Stripped of his exotic finery, which I saw just days earlier, hundreds of kilometres north, in the Egyptian Museum, this shrivelled figure looks somewhat battered lying here in his tomb. Beaten – yet unbowed. A unique survivor, you might say, just like Egypt itself.

The Winter Palace was built in 1886, within a tropical garden on the banks of the Nile

Perfect for a relaxed cruise along the Nile, the stylish Sanctuary Sun Boat III exudes all the discreet, elegant ambience of an exclusive club

A stylish blend of Moorish architecture and designer furnishings, Oberoi Sahl Hashish is an elegant resort, with spectacular views over its own private stretch of coastline

Cruise the Nile in style aboard the Oberoi Zahra. As the vessel plies Egypt’s most iconic river, you’ll be staying in some of the most spacious, luxurious accommodation to ever grace its waters

Set in a tranquil oasis, between the desert's edge and the fertile green fields of the West Bank of the Nile, Al Moudira is a hugely impressive boutique property

Opened in March 2009, in Cairo's most lushly landscaped quarter, the boutique hotel 'Villa Belle Époque' is an ideal base for exploring this historic city

Fairmont Rooms are the ultimate in urban chic with city views. Deluxe boast Nile views and Signature rooms have their own terrace and work area

The Marriott Mena House is one of the most unique hotels in Cairo, with its own rich and colourful history