When to go to Japan 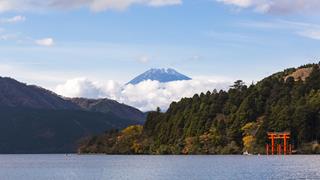 Japan’s winter is the optimal time to head to Jigokudani, a scenic spot where Japanese Macaques come down from the mountains and bathe in the onsen (hot springs).

On the second Monday in January every year, over 1,000 archers fire arrows along the length of the Sanjusangendo temple in Kyoto. You can also see the Sumo New Year Basho in Tokyo.

Although cold, the sun is usually out, and the weather is constant and easy to plan for. It’s a great time for skiing in the Japanese Alps and Hokkaido, and you can see the first cherry blossoms in Okinawa.

Head to the northern city of Sapporo (famous for its lager of the same name) for the week-long Snow Festival (Yuki Matsuri). The festival takes over much of Odori Park, with exhibits of huge ice versions of world-famous buildings such as St Paul’s Cathedral and the Statue of Liberty. The city’s streets are full of smaller ice sculptures as well as concerts and traditional performances.

This is the coldest month of the year and primetime for skiing. The cherry blossom can be seen in Kyushu and Chinese New Year celebrations take place in Yokohama. The picturesque plum blossoms will also be beginning. 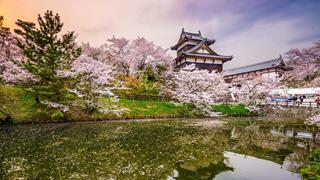 As spring approaches and the cherry blossom reaches Tokyo, March is an excellent time to enjoy the beginning of the warm weather. The many gardens of Japan will be at their best too.

Witness numerous unique festivals such as the Omizutori Festival in Nara, which includes music, parades and fire shows. The Naked Man Festival near Nagoya, where hundreds of men in loincloths gather to drive out bad fortune, is also worth attending. However, most memorable of all is the Hōnen Matsuri, or fertility festival, which has to be seen to be believed. 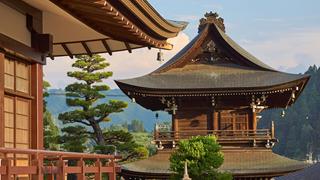 April sees Japan’s famous cherry blossoms in full bloom throughout the country, along with the full warmth of spring. This is prime hanami (or flower-viewing) season, and it’s easy to see why these flowers are so important to Japanese culture. Kyoto and Tokyo become the most revered spots to take in this sea of pink.

April is the busiest month to come to Japan, so book well ahead. One lesser-known beauty hotspot is the mountainous town of Takayama, with its romantic lanes lined with cherry trees. April also sees Takayama’s Sanno Festival, with its large ornate floats parading through the streets.


Visiting Japan in May

It’s worth heeding the warning that Golden Week, a series of national holidays at the very beginning of May, is completely chaotic – the whole of Japan is on the move. The bullet trains are packed out and prices rise. However, the weather in Japan is at its best, and Kyoto’s Aoi Festival on the 15th is worth fighting through the crowds for. The celebrations consist of a mass Shinto procession of over 600 people in costume. However, the sun is yet to reach Hokkaido, and if you book early in the month you can still ski in some places. 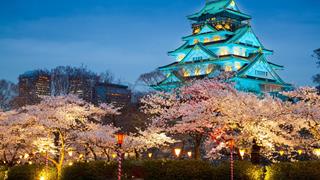 The beginning of June is usually sunny, but you should still come prepared for showers. For those looking to avoid the crowds, it’s an excellent time to visit any region of the country. On the 15th, on the sacred mountain of Koyasan near Osaka, hundreds of priests celebrate the birth of Kukai, the grand master of Japanese Buddhism. You can even stay overnight in one of the many temples or shukubo.

In the latter half of the month, the rains become more frequent and the humidity begins to rise. Though there’s something to be said for getting the sights all to yourself.

As the heat rises, the rains begin to abate. Enjoy hot and humid summer, while the countryside springs to life. Now’s the time to head into the mountainous prefecture of Gifu to hike the scenic Nakasendo way, the former route of the samurai. The wooded hike between the untouched towns of Magome and Tsumago offers luscious vegetation, abundant wildlife and fine waterfall views.

Another important Kyoto festival takes place in this month. The Gion festival is the city’s biggest celebration, involving huge processions of unique floats. Whether you come for nature or culture, you can get some amazing photos in July.

August is hotter and slightly less humid, and there’s a lot to see. The nation observes the three-day Buddhist custom of ‘Obon’, to honour one’s ancestors, and ‘Bon Odori’ is a traditional dance performed throughout Japan.

There are many festivals and celebrations throughout August, and it’s a great time to see the country at its most joyful and active. However, the moving tradition of setting thousands of paper lanterns adrift on the River Ota to commemorate the anniversary of the atomic blast in Hiroshima (6 August) is also worth witnessing

In September the country cools down a touch, and the spectacular storms become more frequent. Professional sumo tournaments are held six times a year, once in every odd-numbered month, and in this month one of the largest tournaments takes place in Tokyo. It’s also time for the holidays which make up Silver Week, a time to avoid travel.

The end of September sees the first of the falling leaves, as late summer heralds the onset of the renowned Japanese autumn. This is a perfect time for hiking and exploring the countryside. It’s also the month for whale watching in the southernmost cities.

October is a time to see Japan in its full beauty, as the mild weather of autumn provides the perfect atmosphere for viewing all the natural sights. Head into the Japanese Alps and experience the onsen when they’re surrounded by a palette of delectable Autumnal colours. The weather is sunny but cool enough for hikes and cycling.

As well as the well-known Takayama Festival taking place on the 9th and 10th, Kyoto’s Jidai Festival occurs on the 22nd, when a 2,000-strong crowd of people in ornate costumes depart from Kyoto Imperial Palace towards Heian Jingu shrine.

Although the weather remains dry and sunny, it begins to cool down in November. The first few days of the month are the only time of year you can enter the Imperial Palace in Kyoto. It’s also harvest season for much of the country’s produce, which means there are a number of harvest festivals wherever you go, and the menus are at their freshest.

Another festival is Shichi-Go-San, where on 15 November parents of three, five and seven-year-old children dress their kids in kimonos and take them to the nearest temple to pray for good health.

The weather in December is crisp and cold, and it’s another time to see the sights free of the crowds. The snow-filled trees and frozen lakes make for incredible snaps, and the ski resorts are all opening up in Hokkaido and the Japanese Alps.

The Daikon festival in Kyoto (9 & 10 December) celebrates winter food and is always full of tasty treats. Some Japanese people even celebrate Christmas, and on New Year’s Eve it’s tradition to eat toshikoshi soba (buckwheat noodles) and temples all over ring their bells 108 times to welcome in the new year.

A taste of Japan

Let us reveal the secrets of sushi and sashimi as you learn to make soba noodles, sushi rolls and miso soup in Tokyo and Kyoto

The Colours of Japan

Japan is a kaleidoscope of natural beauty, elegant architecture and cultural wonders

Combining fantastic foodie experiences, remote natural retreats, and a chance to discover Japan’s historic and ultra-modern marvels, this diverse itinerary leads you to the heart of an extraordinarily unique country

Launched in 2013, Le Soleal is a welcome addition to A&K's privately chartered expedition boat complement, and is the sister vessel to the renowned Le Boreal, our polar cruising ship

The accommodation has a traditional Japanese design, complimented by fresh modern elements making a relaxing and spacious guest room

Ritz-Carlton's fourth Japanese hotel has just opened in the cultural city of Kyoto, overlooking the Kamogawa River with views that extend to the Higashiyama Sanju-Roppo - the famous 36 mountain range

Sumiya is a very inviting authentic Japanese ryokan. As one walks into the main door there is a fusuma (Japanese sliding door) so you immediately feel as though you are visiting an old traditional Japanese home

Experience traditional Japanese life on the secluded island of Taketomi. Unwind in a luxury wooden pavilion, soak up the scenery and enjoy the fantastic local cuisine

The Park Hyatt Tokyo is an elegant oasis of space and calm that offers spectacular views of Tokyo and the Kanto Plain all the way to Mount Fuji, from the top 14 floors of the 52-storey Shinjuku Park Tower

Hidatei Hanaougi is one of the top ryokans, or traditional inns, in the rural city of Takayama

This unique art-style Ryokan lies in the heart of Takayama's old town, close to many of the town's main attractions including the soothing hot springs

Amanemu, which translates as peace and joy, is located on Ago Bay on the Shima Peninsula

An expansive resort on a private beach, The Busena Terrace offers a wealth of activities from scuba diving to wakeboarding and windsurfing

Benesse House is both a museum and a hotel, designed by Tadao Ando, one of Japans bets known architects

Kyoto can be said to embody the very spirit of Japanese culture. The Arashiyama area of Kyoto, with its famous Togetsuyo Bridge, is a place without any tall, modern buildings

Located in the upper levels of Kyoto's recently rebuilt railway station, the Granvia Hotel Kyoto is the most convenient as well as one of the most luxurious of Kyoto's hotels

The Hyatt Regency is located in Higashiyama Shichijo, the traditional and cultural heart of Kyoto city

Just 15 minutes’ drive from the famous Gion Geisha District, the Four Seasons is perfectly positioned for exploring the historical and culturally rich city of Kyoto

A 4-minute walk from Kyoto Shiyakusho-mae subway station, this modern hotel is 3 km from both the Kiyomizu-dera Buddhist temple and Nijo Castle

Hotel Nikko Kanazawa is located on Honshu's west coast, fringed by the Sea of Japan and a backdrop of snow-capped Japanese Alps

In many ways the Hyatt Regency Hakone Resort and Spa offers the best of both worlds - a fusion of ryokan and hotel which refuses to compromise on comfort, service, or luxury

Set in the heart of nature, experience real peace at Hakone Kowakien Ten-yu

Stay in the centre of scenic Hida-Takayama, at a modern property with a traditional soul

Our favourite photos of Japan

From Tokyo's sacred shrines to the faith, colour and culture of the Indian subcontinent, our well-travelled team will craft the right itinerary for you
Meet the team