Penelope Rance shines a light on this land of contrasts, from its ancient cities to its high-tech hubs. Additional research by Gerald Hatherly.

Some of the ancient world’s most sophisticated civilisations were forged in China, but visitors to the country will not find a nation basking in past glories. Here the modern world shines just as bright, progress marching ahead while showing due deference for its noble history. And it’s possible to discover it all, exploring the past and present of this fascinating country on a tailor-made A&K holiday. If the thought of trying to unlock China’s secrets on your own is intimidating, let us lead you off the tourist trail to marvel at its many wonders. We’ll take you to some incredible locations where you can experience China, both old and new, in all its multi-layered magnificence. 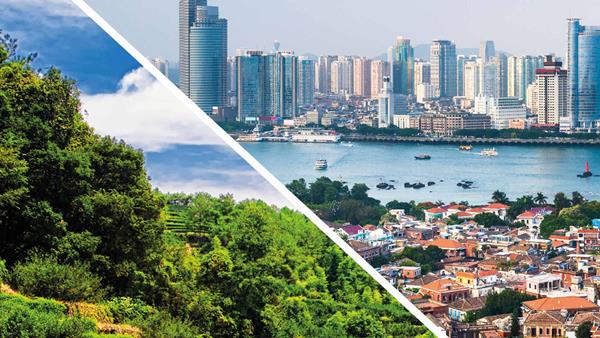 Despite its importance in China’s history, Fujian is often overlooked by visitors to the country. Today a centre for international trade and development, it has long been one of the great tea regions of China, notably at Wuyi Mountain, home to Dahongpao cha (Big Red Robe tea), a variant of oolong said to be worth more than gold. Also found among the province’s mountains is the Tulou architecture of the Hakka people, built between the 15th and 20th centuries, and now a UNESCO World Heritage Site.

Fujian’s largest metropolitan region, Quanzhou, was the biggest seaport in China during the two Song Dynasties (from 907 to 1279), trading with South-East Asia, India, the Middle East, and beyond. The city contains early mosques, an Arab graveyard and relics from the Tang (618-907) and Song periods.

The province is still at the forefront of trade and commerce, and is a leader in joint-venture industry, with international companies including Boeing, Dell, GE, Kodak, Nokia, and Siemens basing production facilities there. The Fujian Golden Triangle of Zhangzhou, Quanzhou, and Xiamen is one of the key production zones in China. 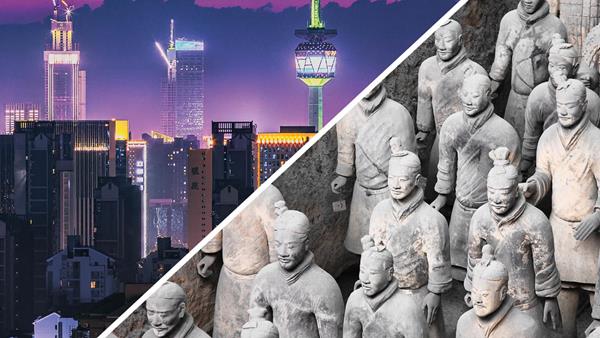 Nowhere do ancient and modern China contrast more strikingly than in Xian. The capital of Shaanxi Province is perhaps the country’s most historic city, and sits at the leading edge of China’s high-tech explosion.

Head of the Silk Road for over 1,000 years, and the seat of power for 13 ruling periods of Chinese history, there are more than 70 imperial burial sites around Xian, including that of Emperor Qin Shi Huang, still guarded by his Terracotta Army. The largest ancient city wall in China encircles it; the first mosque was constructed here in 742; and it houses the ruins of Banpo Neolithic village, dating back 6,000 years.

The modern face of Xian is as a seat of education with 90 degree-granting universities and colleges graduating 350,000 students per year. Many go on to work for one of the international companies which have set up operations in the city, designated by the government as a central innovation hub for the tech industry. This has earnt Xian its new title: Capital of the 21st Century Silk Road. 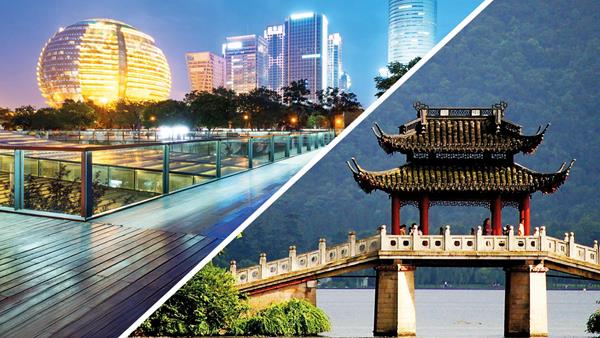 The epitome of old entwined with new, Hangzhou embodies the quintessential China of pagodas, gardens, and temples, while still being its wealthiest business city, with the highest concentration of entrepreneurs.

The region around Hangzhou is home to one of the most advanced known Neolithic cultures, flourishing from 5500BC to 3300BC, and considered the first Chinese people to cultivate paddy fields, have advanced pottery works, and use lacquer. A centre for silk and tea production, Hangzhou was the capital of the Southern Song dynasty (1127-1279), when it was also the largest city in the world.

Now a metropolis of seven million people, Hangzhou is the heart of China’s Silicon Valley. Home to ecommerce giant Alibaba, it continues to lure tech start-ups and entrepreneurs. But it’s not all digital: a centre for the revolution in landscape painting in the 12th century, these days the city is home to the China National Academy of Fine Arts. 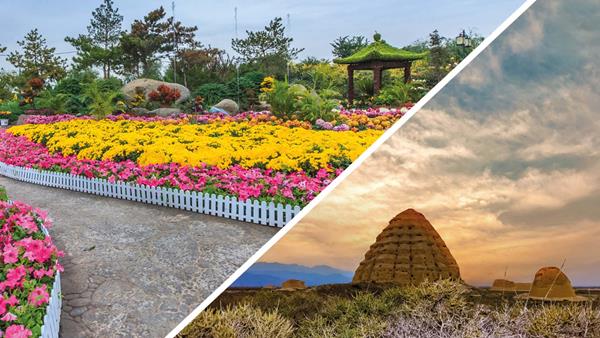 Little known to visitors from the West, Yinchuan and Ningxia serve as an illustration of China’s aspirations for the 21st century. In 2000, the country barely registered as a wine producer. Less than two decades later, it ranks seventh in the world in terms of production, with Ningxia’s 100-plus registered wineries creating award-winning vintages. A handful of these are open to the public, with some offering guided tours, meals, and accommodation.

The region’s history is as impressive as its future. Ningxia was once part of the Ordos, a wild steppe wasteland home to warlike tribes of horsemen. This western frontier separated the nomads from the civilisation of ancient China. It made up the Western Xia region of the Tangut Empire, which lasted from 1038 until 1227, when the Xi Xia were annihilated by Genghis Khan and his Mongol horde. 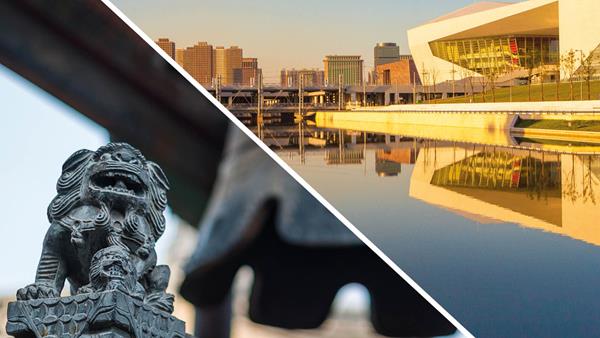 One foot firmly in the future, Shanxi is an important military region and a leader in power generation, while the capital Taiyuan is a hub for industry, education and research. It is full of museums, temples, universities, and charming green spaces.

The other foot is rooted in the past. A cradle of early Chinese civilization, the province ‘West of the Mountains’ birthed the revolution which created the People’s Republic. It shelters sacred mountains including Daoist Hengshan and Wutaishan, the famous Buddhist site. Ancient Datong, capital of the Northern Wei Dynasty from 398 to 493, boasts the Hanging Temple, Yungang Buddhist Grottoes, Shanhua Temple, and the Nine Dragon Screen. Shanxi is also home to Pingyao Ancient City, a UNESCO World Heritage Site demonstrating early town planning by the Ming and Qing Dynasties.

Feeling inspired? Browse our suggested China itineraries, or speak with one of our travel specialists about a tailor-made holiday to this fascinating destination.

The Discover China itinerary includes visits to the Forbidden City, Temple of Heaven, Tiananmen Square, the Summer Palace and the army of Terracotta Warriors

As one of Yangshuo's newest resorts, the Banyan Tree offers understated luxury in a spectacular setting

The historic tea culture of Chengdu weaves its way through this contemporary hotel, set on the site of a former imperial palace

The Sofitel Legend Peoples Grand Hotel is set on the former Imperial Palace grounds in the heart of Xian, a Chinese town shrouded in ancient history

Waldorf Astoria Shanghai On the Bund

Waldorf Astoria Shanghai on the Bund offers a heritage ambiance, faultless service and those essential amenities to make your stay truly memorable and distinct

Elegant and stylish, the Sanctuary Yangzi Explorer is perfect for relaxed cruising through spectacular and ever-changing landscapes

Hotel Indigo Shanghai on The Bund

Hyatt on the Bund Shanghai

Hyatt on the Bund Hotel Shanghai is a 5 star luxury hotel, uniquely located on the banks of the Huang Pu River at the northern end of the Bund

Each room takes inspiration from the Art Deco period and "Golden Age" when Shanghai was the Paris of the East, and blends traditional Peninsula standards of luxury and state-of-the-art technology with historical references

Located in a small green valley is Songtsam Benzilan. The villagers who live in these villages are very friendly and live by their traditions

The lodge has a wonderful location to explore the beautiful area that is Tacheng. A small and intimate property beautifully designed to make the most of the stunning views around

Songtsam Meili overlooks the majestic Meili Mountain Range. Most of the rooms have a stunning view of Meili, a memorable experience for every guest who stays

The Songtsam Linka Shangri-La is a boutique lodge with 75 rooms and suites, each decorated with traditional Tibetan carpets and antiques

Swimming in the heated 20m outdoor pool at Amandayan feels like a throwback to another era, like enjoying a workout in a Ming dynasty tea house

Designed along Naxi architectural lines, the Banyan Tree's luxurious villas are built around courtyards and reflect the rich fabric of the area through furnishings and design

Located overlooking the glittering Victoria Harbour, the Mandarin Oriental has been at the epicentre of Hong Kong's social and business scene since 1963

Set in the heart of Kowloon, The Peninsula has long been recognised as one of the finest hotels in the world

Without compromising the integrity of the dwellings, all the rooms enjoy the comforts of radiant under-floor heating, air conditioning and internet connectivity

On the banks of the Li River, framed by karst peaks, the Shangri-La offers repose within Guilin’s picturesque mountain scenery

The Linden Centre is housed in one of the most stunning examples of traditional Bai architecture, the Yang Jia Yuan, built by the original owner, Yang Pin Xiang

It's just a short drive past picturesque rivers, grand bridges and streets full of hibiscus flowers and gingko trees, until you arrive at the resplendent Shangri-La Hotel in the history-rich city of Chengdu

Located at the picturesque gateway to the majestic Qing Cheng Mountains, Six Senses Qing Cheng has been designed to complement the UNESCO World Heritage & Natural Cultural site nearby Dujiangyan

With the perfect balance of ancient and modern, The Temple House reflects similar characteristics to that of the spirited city in which it resides

A landmark building in Beijing, The Peninsula exudes an atmosphere of luxury living - exemplified by the highest standards of service and flawless attention to detail

New World Beijing Hotel is centrally located in one of Beijing's fastest growing commercial districts and situated close to the cultural attractions of The Temple of Heaven, Forbidden City and Tiananmen Square

The Aman at Summer Palace

Just steps from the East Gate of the Summer Palace grounds lies Aman at Summer Palace. It is the ideal location from which to discover Beijing, providing easy access to landmarks such as the Great Wall, The Temple of Heaven and the hutongs

A member of the exclusive Small Luxury Hotels of the World, 5-star boutique Hotel Éclat Beijing is a striking landmark on the Beijing skyline, standing impressively in the heart of the city’s downtown Central Business District

The Anantara hotel is located in the beautiful city of Jinghong, with the backdrop of the Hengduan Shan Mountain Range to the south and the Mekong River passing on its way south-east to Laos

Courtesy of Four Seasons, the Puxi hotel sits in a historical sweet spot