When to go to Sri Lanka 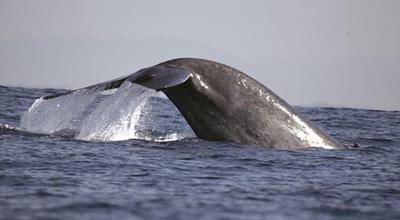 January sees Sri Lanka enjoying warm weather and religious celebrations. The marine wildlife becomes active and visible. The season for dolphin watching begins in the northwest city of Kalpitiya, a beautiful peninsular bordered by the Indian Ocean and a lagoon. The southern coasts also yield dolphin and whale sightings, particularly in Mirissa, which continue until around March.

The Kelaniya Raja Maha Vihara Buddhist temple is famous for its paintings and frescoes depicting scenes from Buddhist history. 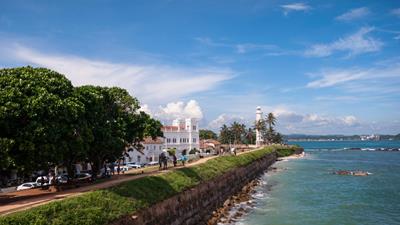 A visit to the south coast would be incomplete without seeing the UNESCO World Heritage Site of Galle. Known as a ‘city within a city’, the busy port of Galle was settled by Europeans. Today, it’s famous for its Dutch Fort, cobbled streets, outdoor dining, boutique hotels and stylish stores. The nearby area is renowned for cinnamon tapping and virgin white-tips tea. The iconic Gangaramaya Buddhist temple is one of the oldest landmarks in Colombo. 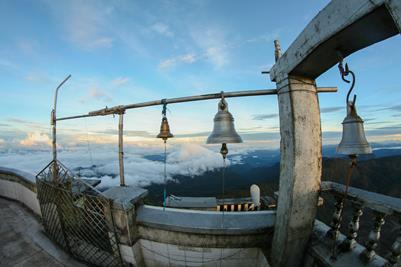 Adam’s Peak, a UNESCO World Heritage Site, is of religious significance to many different faiths. March is the midway point of the annual Adam’s Peak pilgrimage season (December to May) and a great time to visit. If you start out at around midnight, you’re set to reach the summit for dawn for a sunrise like no other.

Sinharaja Rainforest Reserve is Sri Lanka’s largest remaining virgin rainforest and another UNESCO site. More than half of the trees here are indigenous and many are endemic. In March, this is an excellent destination for bird watchers. Meanwhile, in the east-coast city of Trincomalee, the whale-watching season comes towards a close.

Although bright and sunny, rain can be expected in the evenings.

The two main nationalities of Sri Lanka, the Sinhalese and Tamils, celebrate Avurudu (New Year) in April. In this harvesting month, you’ll experience traditional customs, lavish hospitality and many age-old New Year games. At a certain time, the whole country stops cooking until the new year has been welcomed in.

During the festivities, the hillside town of Nuwara Eliya becomes a popular destination. Hakgala Botanical Garden is in full bloom, and horse racing, live music, flower and agricultural shows, motor-racing tournaments and golf competitions all commence.

Visiting Sri Lanka in May 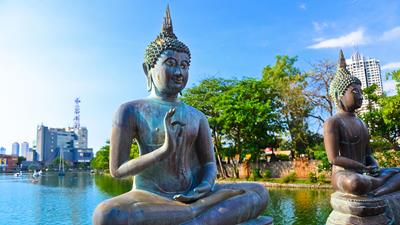 Light evening rains are common in May, though the days are warm and sunny. The Vesak Festival, the most sacred day in the Buddhist calendar, is celebrated throughout. By night the whole island is lit up by lanterns, ranging from oil lamps to more elaborate ones made of bamboo and decorated with tissue paper. The capital city of Colombo is exceptionally beautiful and well-lit, and one of the best places to be. In 2020, the festival begins towards the beginning of May, and it will showcase Sri Lanka at its most vibrant. 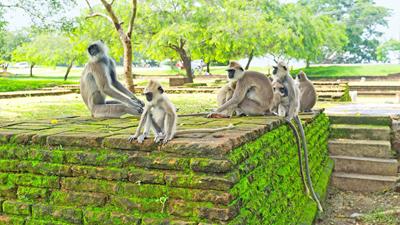 June marks the beginning of Sri Lanka’s warmest months. It’s the perfect time to stroll around historic Anuradhapura, founded in the fifth century BC. The brilliant white dome-shaped Ruwanweliseya and Jetavanaramaya stupas have survived over two millennia, and the latter is equal in size to the pyramids of Giza.

June is also the season for palu, a wild berry found in the jungles of Sri Lanka. These are a particular favourite of the Sri Lankan sloth bear who reside mainly in the Yala and Wilpattu national parks. As they become more active, sightings become much more likely. 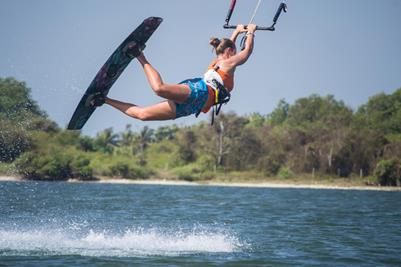 July is a warm month, and with the building winds surfing season arrives. Arugam Bay is ranked among the top surfing beaches in the world. On Kalpitiya Peninsula, the kitesurfing is at its best. The Indian Ocean provides the perfect set-up, while the lagoon on the other side is ideal for beginners.

The annual Kataragama Festival attracts pilgrims from all parts of the island each July. Kataragama is one of the most important places of pilgrimage in Sri Lanka, sacred for both Buddhists and Hindus.

Occasional evening showers can occur in August, but the warmer climate continues. 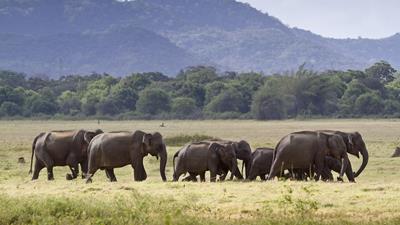 From July to September, one of Asia’s most amazing spectacles can be seen. The Gathering takes place at Minneriya National Park, where around 300 elephants make their way to the ancient Minneriya reservoir to feast on the fresh grass and shoots.

Located in the North Central district of Sri Lanka, Minneriya is a sanctuary for a great amount of wildlife. Minneriya Tank – a reservoir built in ancient times – is itself a highlight of the park. It’s only when it starts to dry out that the fresh grass and shoots appear, attracting the elephant, as well as deer and water buffalo. 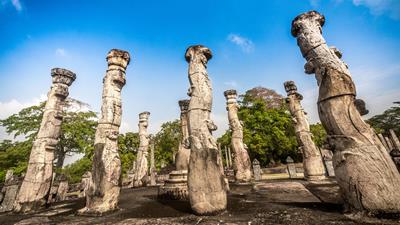 Rain tends to be more abundant in October, though the climate is still warm. At this time of year, a visit to the UNESCO-site Polonnaruwa will reveal Sri Lanka at its most wondrous. Polonnaruwa is home to the Parakrama Samudra, a reservoir constructed around 386 AD. This ancient monument is also known as the Sea of Parakrama due to its huge size.

Sri Lanka’s monsoon is unpredictable, and some years it appears lightly if at all. Sometimes it only affects the northeast of the country. A flexible itinerary is the best way to stick to the drier regions. 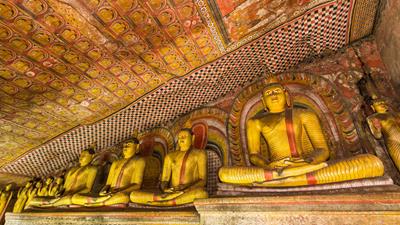 November marks the beginning of the peak period for Sri Lanka. You can enjoy the warm atmosphere in a number of ways, including a hot-air balloon ride over Dambulla where cave temples are marked by magnificent golden Buddhas. There are few better ways to experience the majesty of the Sri Lankan sunrise.

It’s also well into the cricket season. A passion that unites an otherwise diverse culture, cricket is a crucial part of everyday life here. As Sri Lankans gather around televisions and fill out matches, you’ll see the game absorb the whole country.

In December the weather becomes cooler during mornings and evenings, though the days are warm and perfect for many Sri Lankan experiences. The Kelani River, the country’s second largest, flows from the Central Highlands down through picturesque Kitulgala. Here, the terrain creates the perfect environment for white-water rafting. With many of the rapids graded as two or three, Kitulgala is an extremely popular place for this exhilarating activity. It’s also the perfect time of year for diving excursions to see the abundant aquatic life including several species of turtle among the many shipwrecks and coral-rock formations.

Embark on an escorted tour discovering the beguiling treasures of Sri Lanka, from its flavoursome cuisine and sacred temples to its fascinating ruins and natural wonders

Discover the mountains, jungles, beaches and bustling markets of Sri Lanka with an itinerary that takes you to the country’s heart.

Two nights to explore Sri Lanka’s wild side. Hike through the Sinharaja rainforest and head to the beach town of Mirissa for whale spotting

Three nights to discover Colombo’s cuisine. Visit the fishing town of Negombo for fresh seafood and enjoy a tea-tasting session and cooking lesson

Two nights in Sri Lanka, white-water rafting down the Kelani River and trekking the Horton Plains. Cycle through a tea plantation with a tasting lesson

Salute the Sri Lankan sun at incredible locations, learning yoga postures and meditation techniques in your journey across Paradise Island

The wildlife of Yala

Spend three days in Yala. Venture out on game drives and take in the spectacular wildlife. Immerse yourself in nature with a thrilling walking safari

Built between 1890 and 1939 each bungalow is unique, but they all combine classical and contemporary styles

Situated only twenty minutes from Sigiriya Rock Fortress, Water Garden Sigiriya is the perfect place for a luxury break almost in the shadow of this iconic site

Just half an hour east of Galle on Sri Lanka's palm-fringed coast, The Cape Weligama is set within five hectares of beautiful gardens, peering down over the Indian Ocean

Located one and a half hours south of Colombo, an excellent choice for a beach holiday on the south west coast

Conveniently located just 60km from Colombo, Vivanta by Taj-Bentota boasts one of the best beaches in the Indian Ocean, with the cluster of 160 rooms trickling down a gentle slope through the gardens to the sea

Reef Villa is a unique boutique hotel where a fabulous team of gracious, friendly and professional staff are waiting to indulge and spoil all your senses

For nature lovers and conservation enthusiasts, this property is the perfect retreat, nestled in a lush 100-acre haven

From afar Heritance Kandalama can hardly be seen, designed to look like a ruin and be unobtrusive

Located at the heart of the Cultural Triangle, the hotel, which blends effortlessly into the lush green landscape, offers a springboard for adventure

Cinnamon Wild has been created to reflect a nostalgic game lodge atmosphere. There are 68 chalets, eight with a beach view and sixty with a jungle view

A luxury black and white beach villa with six rooms that can be booked individually or together, promising seclusion and style

ÀNI Villas commands an incredible, panoramic view of the famous blue waters and is specifically designed for large groups and families

Rainforest Eco Lodge is made of 16 comfortable chalets, cleverly designed from two and a half recycled shipping containers

Set on the unexplored east coast of Sri Lanka is Jungle Beach, a unique and beautiful setting for total relaxation

Theva Residency is a luxurious residence, with a home from home atmosphere created by the sublime furnishings and fabulous staff that attend to ever guests needs

The Goatfell by Teardrop

The Goatfell by Teardrop is an amazingly scenic hotel. The property sits among the magical hills of Nuwara Eliya in the centre of sunny Sri Lanka

A boutique and luxury beachfront hotel near Galle Fort, with all of the tranquillity and cosiness of a villa

The Fort Printers is a unique hotel set in the 16th century UNESCO World Heritage site of Galle Fort, this 18th century mansion is full of charm and class

TRI is a haven of tranquillity, with only eleven suites and villas this is an intimate retreat

Taru Villas, 25 Rampart has an enviable location in the heart of the historic Galle Fort

42 Lighthouse Street dates back to the 1800s, built for a Dutch merchant and his wife, the villa has been beautifully restored to its former glory offering a stylish and elegant place to stay

With 300 rooms and suites spread among five hectares of landscaped gardens, it's hard to imagine you are in a capital city

For a slice of cosmopolitan city living The Residence offers a sophisticated slice of luxury in a leafy region of Colombo, nestled close to one of the city’s principal Buddhist shrines

Conveniently located just 15 minutes from Colombo airport, the Wallawwa at Ja Ela is the ideal property to start or finish your Sri Lankan journey