You may have heard of the Inca Trail – a four-day hike over 42 kilometres, which is on just about everyone’s travel bucket list. But, while millions flock to this very beaten track, trekking off-piste can be hugely rewarding. Visit sites that rival Machu Picchu such as Choquequirao, Peru’s unsung citadel. or take paths that lead you deep into the Andes without seeing another soul. Who needs the Inca Trail? Here are five alternative hikes.

Not so little sister 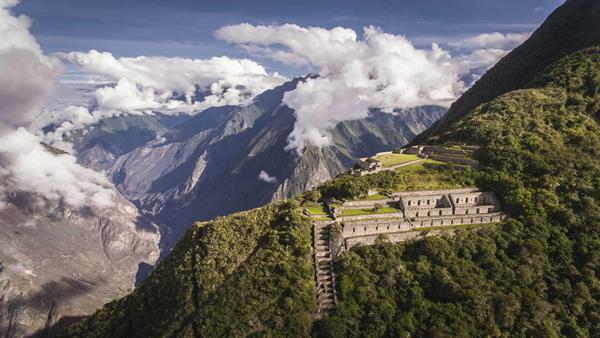 Experienced hikers should revel in this lesser-known trail. Referred to as Machu Picchu’s little sister, the hilltop complex of Choquequirao dates back to the 15th century. Currently, the site is only accessible to those willing to take a five-day hike (60 kilometres) across steep canyon slopes, snowy mountains and jungle terrain. Unlike its bigger sibling, only 64 kilometres away, which sees over a million visitors per year, this archaeological site receives only a dozen or so people each day, who can explore its stone terraces, green plazas and holy temples in peace. And although Choquequirao hasn’t quite reached the same iconic status as Machu Picchu, there’s talk of a cable car for those who don’t want to trek. On the horizon, there may also be a road connecting it to Machu Picchu. But for now, hiking means that you can take in a marvellous Inca site in rare solitude.

Duration: Five days, or eight should you want to end at Machu Picchu 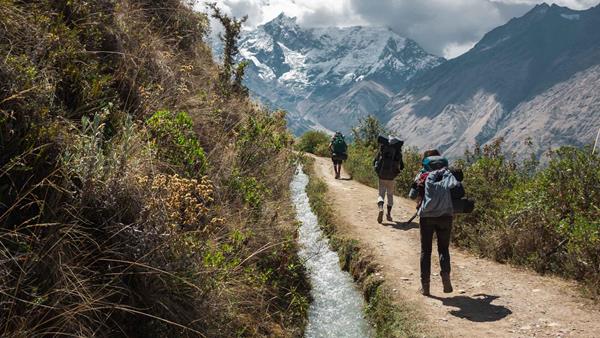 Those game for a challenge may want to consider the

Salkantay trek, which includes a mountain pass that reaches just over 4,572 metres. You’ll be rewarded for your endeavours with Salkantay’s raw peaks (Salkantay means ‘savage’) and a journey along rocky pathways once trodden by the Incas.

En route you can meet Quechuan-speaking indigenous communities tucked away in the mountain landscape. On your last day, descend into tropical terrain where adrenalin junkies can whizz over the jungle canopy on one of South America’s longest zip lines. End at the Hydroelectrica station, a 45-minute train journey to Machu Picchu Town. You could camp, but the hot tubs and deep duvets at Mountain Lodges of Peru along the trail will help you recuperate after days of adventure.

One of the most stunning treks in Peru, the terrain on the Ancascocha route varies from the exposed foothills of the Andean peaks to the fabled Queuñas forest. With the help of horses who’ll carry most of the load, the trek isn’t too strenuous – a good one for adventurous families. Trek up trails carved by the Incas and take in emerald lagoons. You can explore traditional stone houses in remote farming villages, and if you’re lucky you may see a condor or two. A chef will whip up lunches alfresco and every evening you’ll arrive at camp in time for happy hour.

Best suited: Those who like off-beat adventures with perks 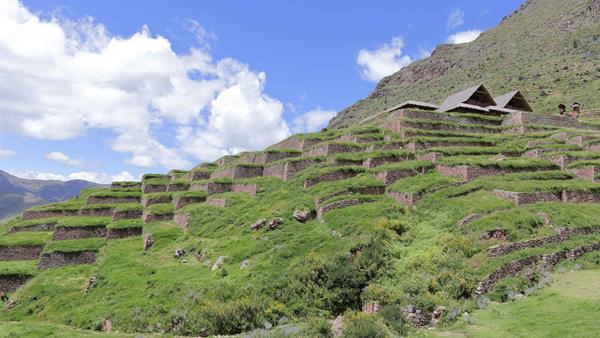 Follow the trail to Huchuy Qosqo or ‘Little Cusco’, believed to be a royal estate of the Inca Emperor, Viracocha. Arrive at the scenic Laguna Piuray, where horses will be waiting to carry your bags. As you traverse the countryside and along mountain passes, you’ll come across jewel-like lakes and plenty of endemic flora and fauna. You won’t see many people, but you’ll be confronted with wild Andean views and herds of curious llama. Stop at an ancient quarry where the Incas cut stones to build Huchuy Qosqo. After wandering the site with your history guide and refuelling on deluxe picnic fare, you
can hitch a ride with our 4x4s that will take you down to
the Sacred Valley.

Best suited: Families and those short on time 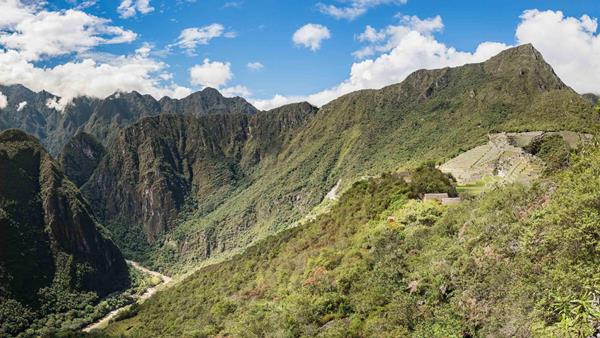 Set off along rarely visited ancient Inca roads which wind through rolling valleys and past high-altitude lakes. Pop into villages where traditionally dressed farmers live a lifestyle unchanged for centuries. Every night arrive at your campsite set up with double beds and hot showers to soothe any aching muscles, not to mention three-course dinners with your favourite tipple and decadent picnics with wow-factor views. If camping’s not your style, then Mountain Lodges Peru offer post-hike cocktails and plush beds along the way. For those who don’t want to miss out on trekking to Machu Picchu, combine this route with a night in a Sacred Valley hotel. The next day, take a train ride to the KM 104 trail, skipping most of the crowds, and climb the final seven miles of the main Inca route to Machu Picchu’s Sun Gate.

Duration: Four days, or five if you want to end at
Machu Picchu

Best suited: Those who like hiking with added luxury

Ready to embark on your Peruvian adventure? Speak to one of our Latin America travel specialists to begin building your perfect itinerary.

The Inca Empire & The Enchanted Islands

Led by your very own Peru guide, this trip covers a lot of incredible ground

Ideal for those wanting to tick off bucket-list wonders from Peru’s ancient lost city of Machu Picchu to Brazil’s natural spectacle, the Iguazu Falls

From Mendozan malbec to citrusy ceviche, the flavours of Argentina and Peru are served up in style on this culinary journey

Our tailor made Peru tours let you experience the past, present and future of this beguiling country, from ancient Inca ruins to modern fusion cuisine

Discover Peru, a country with a rich past of mighty empires, towering mountain ranges and colonial heritage.

Spend two nights exploring the Amazon River on the most luxurious ship. Explore the rainforest on a skiff, search for pink dolphins and fish for piranhas

Dig in to Lima's culinary scene

Spend four days hiking the iconic Inca trail to the ancient citadel of Machu Picchu. With specialist guides and porters, enjoy both adventure and luxury

Trek along the Inca Trail

Follow in the footsteps of the Incas with a trek along the Inca Trail to the Lost City of Machu Picchu. Pass cloud forests and see the iconic Sun Gate

Take to the hills with a visit to the high-altitude village of Chinchero in the Sacred Valley. View the glistening saltpans of Maras before exploring the circular terraces of Moray

Channel the spirit of the Incas in a stand-up paddleboarding adventure. Venture to a high-altitude lake frequented by local fishermen and paddle around ancient scenery

Explore the hidden gems along the Urubamba River during a white-water rafting experience. This is the perfect trip for a family eager to combine adrenalin and nature watching

Ride through Peru’s arid sand dunes, some of the highest in the world. Take in the desert during sunset and enjoy dinner alfresco under the stars

Visit Larco Museum to view one of the largest private collections of pre-Inca ceramics in the world. Head to the city’s pisco bars to sip on Peru’s national spirit

Learn how to make ceviche

Take a culinary journey in Peru’s foodie capital. Source fresh produce from the local market. Sip on pisco sours and learn how to make ceviche in an elegant Barranco home

Read More
Show more
viewing   of
Chosen by our travel specialists to surpass your highest expectations, A&K Favourites are a collection of luxurious hotels which offer our clients a little something extra on check-in.

One of the most unique hotels in Cusco, the Monasterio, A Belmond Hotel combines centuries-old charm with professional service

Located in the heart of Barranco, Lima's bohemian art district, and surrounded by galleries and fashion boutiques, is one of Lima's newest and most elegant hotels, Hotel B

Renowned for its beautiful garden location beside the Pacific Ocean, the Miraflores Park enjoys breath-taking views out to sea

Explore the Amazon in ultimate luxury. Wake up to stunning views through panoramic windows and discover the wild outdoors with a range of exciting activities

The Delfin III promises an adventure on the Amazon that you’ll remember for a lifetime. Savour the stunning scenery through floor-to-ceiling windows

Set outside of Puno town itself and with spectacular views of Lake Titicaca, particularly at sunrise, the GHL Hotel Lago Titicaca is the perfect choice for an overnight in Puno

Titilaka is a striking modern lodge, offering a luxurious refuge from which to explore the national, cultural and historical treasures of this remote and mystical region

Within the vast high-altitude Lake Titicaca, bordering Peru and Ecuador, the lies the small island of Amantani

Rio Sagrado, A Belmond Hotel enjoys a privileged location overlooking the Urubamba River in the heart of the Sacred Valley of the Incas

Located just a short shuttle ride from the entrance to Machu Picchu, the lodge serves as an excellent base from which to explore

Set in the heart of Arequipa, Cirqa was once a wing of the historic San Agustín Church

With its stylish contemporary design, cutting-edge technology and ideal location, the flagship of the Casa Andina Premium Miraflores is a great modern option in Lima's best district

Built in the heart of the Urubamba Valley, among the flowers and trees that carpet the mountainous region, Inkaterra Urubamba has been designed with the architecture of the Cusco region in mind

Once the 16th-century home of Francisco Pizarro, the Spanish conqueror of Peru, Palacio del Inka is steeped in history

Set among the beautiful and peaceful surroundings of Peru’s Colca Canyon, one of the deepest canyons in the world, this collection of luxurious casitas offer the ultimate Andean escape

Set in a lovely colonial town, the Libertador has been remodelled, and offers 88 rooms including 6 suites all within the city's largest park, only 6 blocks from the Main Square

Tucked away in the world’s second deepest canyon, Colca Lodge is the perfect base to pursue the condor, one of the wonders of the natural world